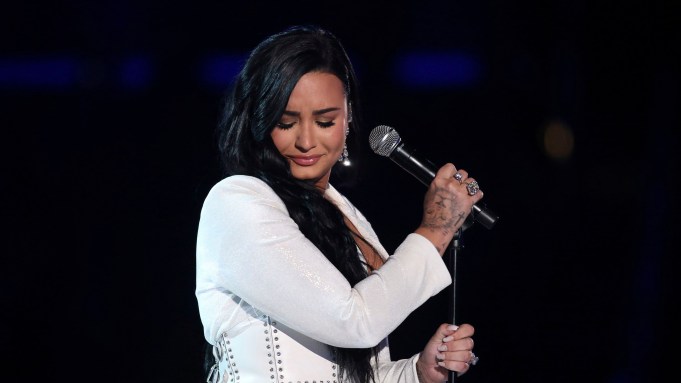 Demi Lovato made a triumphant return to the stage during the Grammys on Sunday, debuting her new song “Anyone.”

The pop singer had an emotional start to her performance, having to pause and restart the opening, but that didn’t stop her from ending with a bang and earning a standing ovation.

Lovato, who had tears running down her face, belted out the emotional lyrics about addiction that hold even more resonance in light of her recent overdose. “Anyone, please send me anyone/ Lord, is there anyone?/ I need someone,” she sang.

The evening marked Lovato’s first major public musical performance since her drug overdose and subsequent hospitalization in the summer of 2018. After completing a 60-day rehab, the singer is now reentering the public eye.

In the lead-up to the evening, Lovato described “Anyone” as a “cry for help” during an interview with “New Music Daily With Zane Lowe.” The ballad was written and recorded just days before her overdose. Lovato said, with hindsight, she’s gained a new perspective on the lyrics.

Lovato last attended the Grammys in 2017, when her “Confident” was nominated for best pop vocal album. She and Christina Aguilera were nominated last year for pop duo/group performance for “Fall in Line.”

Lovato’s Grammys performance is just another example of the singer’s return to the spotlight. She began acting again recently, guest starring in episodes of the final season of the “Will & Grace” revival on NBC. The singer is also set to perform the national anthem at Super Bowl LIV at Hard Rock Stadium in Miami on Feb. 2.