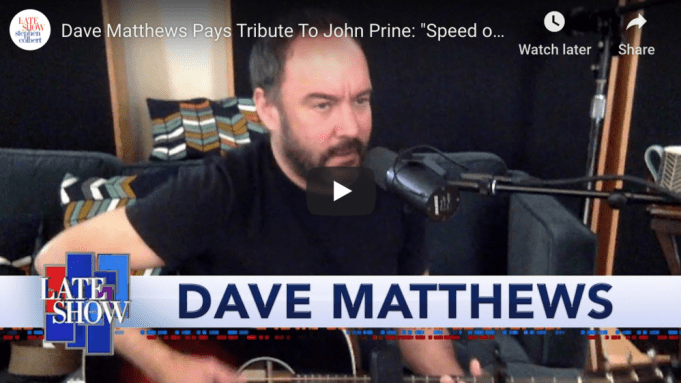 Dave Matthews has long made John Prine’s “Angel from Montgomery” a recurring part of his sets. But in paying tribute to the late singer-songwriter on “The Late Show with Stephen Colbert” Thursday night, Matthews chose an equally forlorn but less frequently optioned chestnut from Prine’s deep catalog: “Speed of the Sound of Loneliness.”

In contrast to the previous night on the late night program, when both Colbert and Brandi Carlile offered spoken introductions to her performance of “Hello in There,” there was little verbiage on the host’s part and none on Matthews’, rendering the song almost even lonesomer in its no-frills presentation.

Matthews is having a busy week in his makeshift home broadcast studio. He’s co-headlining an “At Home with Farm Aid” special Saturday night with fellow Farm Aid founders and board members Willie Nelson, Neil Young and John Mellencamp. Fans may wonder whether that show, too, will provide a platform for Matthews or one of the other performers to pay additional homage to Prine, who died Wednesday after a weeks-long struggle with COVID-19.

Prine first recorded the song on his 1986 album “German Afternoons,” then participated in a duet version with Nanci Griffith on her 1993 album “Other Voices, Other Rooms.” The artist that has covered the song most in concert, curiously, is the Lemonheads.

“It was a song about a breakup,” Prine had said. “I had a picture in my mind of one of the astronauts of the 1950s with his face all contorted by G-force. I was thinking of somebody’s heart being pulled apart by G-force like that.”

Matthews has not previously been known to cover “Speed of the Sound of Loneliness,” but “Angel from Montgomery” has been a staple for him over the years. According to setlist.fm, he’s covered that Prine classic at least 91 times with the Dave Matthews Band and 42 times in his quieter duo shows with Tim Reynolds.

Matthews and Carlile have sung “Angel from Montgomery” together as a duet, too, a number of times over the years, as in the 2011 gig seen below.