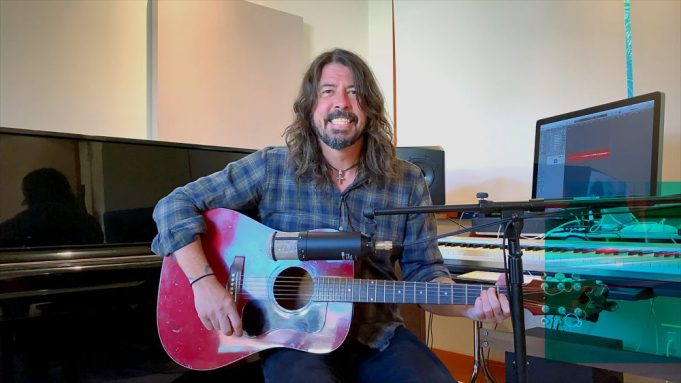 Times like these demand cameos, and Foo Fighters frontman Dave Grohl makes an all-too-brief one in the much-anticipated “Bill & Ted Face the Music,” out this weekend.

Keanu Reeves and Alex Winter are returning for their third outing as Bill and Ted, with a new mission is to find that one song they recorded to unite the world and rescue mankind — all in the space of two time-tripping hours.

As Bill and Ted journey through time, they stop off in 2025, where they meet their future older selves — this time as rock stars who live in a sprawling mansion. Except present-day Bill and Ted soon realize their older selves are con artists, trying to stop them from finding the song, and they realize they’re being conned when Grohl makes an appearance as himself, wondering who these people are at his house.

Grohl isn’t the only musician playing himself: Kid Cudi makes an appearance in the present day. Cudi is recruited by Bill and Ted’s daughters, played by Brigette Lundy-Paine and Samara Weaving, to appear in the backup band for their dads. Jimi Hendrix (DazMann Still), Louis Armstrong (Jeremiah Craft) and Mozart (Daniel Dorr) also make appearances.

It’s not Grohl’s first filmic cameo. He had a few seconds on-screen as the animalistic drummer for a band called the Moopets in “The Muppets” back in 2012. Going further back, and with even less screen time, he appeared as an extra in the background of a 1996 “X-Files” episode, “Pusher.”

In a recent interview, costume designer Jennifer Starzyk revealed the inspiration behind Reeves’ futuristic rock star look: “We added in the top hat, like Slash from Guns N’ Roses, and we took it from there. That whole look of the two was about over-embellishment and how ridiculously rock-star they should look as if they were famous.”