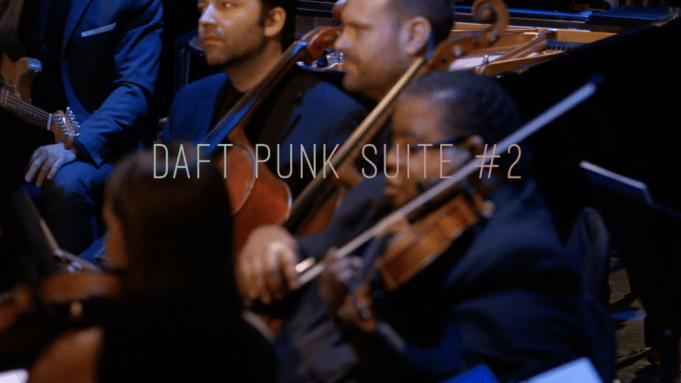 When you think of the electronically inclined duo Daft Punk, two things that assuredly don’t come to mind first are (a) a personnel count that requires more than half of one hand and (b) violins. But Miami’s Nu Deco Ensemble is out to provide a different spin on their material with a symphonic suite’s worth of Daft Punk in “Humans vs. Robots.”

Which side wins? You can be the judge as Variety premieres a video of the suite — click on the image above. First performed at the Light Box in Miami in 2017, “Humans vs. Robots (Daft Punk Suite)” actually marks the second time that Nu Deco co-creator Sam Hyken has adapted Daft Punk’s material into an orchestral suite, looking for the cinematic qualities amid the dance beats.

“When you listen to the music of Daft Punk, there’s a very baroque classical quality to what they do,” says Hyken. “Part of what I wanted to do with this suite is remove the drum elements, highlighting this classical texture. I also wanted to highlight the two distinct phases of Daft Punk, with a record like ‘Random Access Memories,’ which features more acoustic instruments, as well as the earlier work, which is more electronic.”

Nu Deco Ensemble is an off-the-beaten-classical-hall-track orchestra that focuses on adapting the work of living composers and collaborating with musicians, choreographers, dancers and mixed media artists from a variety of genres. In November, the ensemble released a self-titled debut album that adapted OutKast’s work as well as music outside the pop realm by composers Nicholas Omicioli and Andy Akiho.

Says co-creator Jacomo Bairos, “Releasing ‘Humans v. Robots’ feels very full circle. The very first idea Sam and I had was to perform the music of Daft Punk as a reimagined orchestral work. We wanted to push the boundaries of what we believed an orchestra, as a model of ultimate creativity, expression and musical finesse, could be. It was also the centerpiece on our very first concert! Returning back to Daft Punk reminds me of how their music feels timeless. Very expansive, cinematic and wide, yet measured like J. S. Bach. It’s all highly organized, like Swiss clockwork, yet through a French nuance and eliding shape. Sam’s unique ability to keep this music clean and clear, while enhancing the vision of Daft Punk, speaks to the dynamic nature of what the sound of an orchestra is capable of anything.”