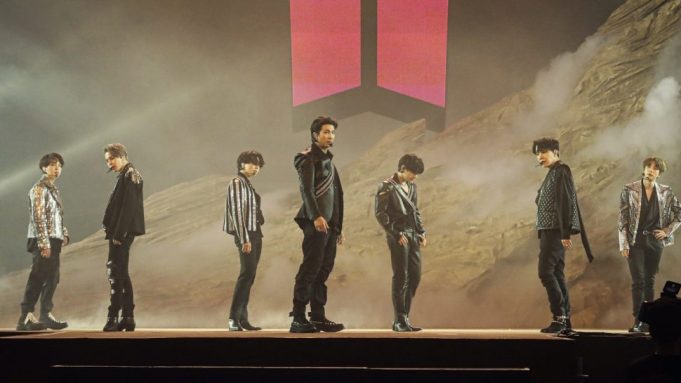 A two-day concert event performed by BTS from Seoul on Saturday and Sunday, “Map of the Soul ON:E,” brought in 993,000 viewers representing 191 countries or regions, reps for the group announced Monday.

Although no gross was reported, in the United States, ticket prices for a basic “HD multi-view” viewing ranged from $45-55 for a single day to $81-91 for a two-day pass. More premium 4K-resolution passes had been offered early on to the group’s ARMY and had quickly sold out.

The shows had originally been planned to be performed before a live audience, but the lack of an in-the-flesh crowd, due to the pandemic, afforded greater opportunities for more adventurous technology. Over the two days, the group sang 23 songs in shows that adding up to a total of 150 minutes of performance, with legions of fans visible on screens during the sets.

Viewers were able to choose from one out of six camera displays during the concerts, which took place on four different stages. Replays were offered to passholders with “delayed single-view streaming.” Theaters in Japan hosted live viewings.

“Map of the Soul ON:E” followed closely on the heels of the last BTS livestream event, “Bang Bang Con: The Live” in June, which had viewing available in 108 countries, 84 fewer than the number of territories that were able to tune in for this weekend’s webcasts. A total of 756,000 fans were reported to have purchased tickets for the summer livestream.

It followed even more closely on the heels of the group’s latest theatrical concert film, “Break the Silence: The Movie,” which premiered globally on a staggered release schedule during the month of September, opening in theaters in the U.S. just two weeks prior to the pay-per-view streaming event.