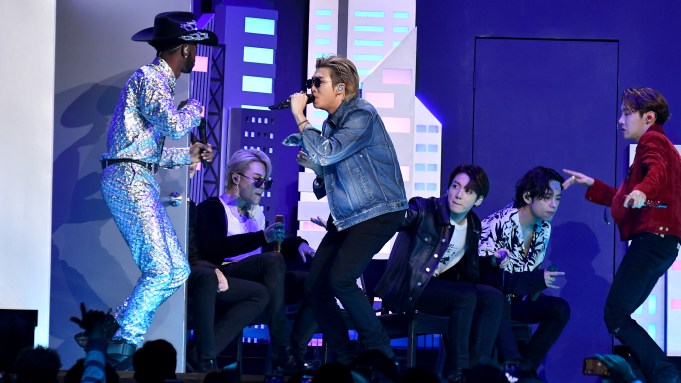 Lil Nas X took the Grammy stage for the first time on Sunday night, but not without the help of some of his friends.

During “Old Town Road,” the stage rotated during each special guest’s collaboration, from BTS to Diplo, to Mason Ramsey, to finally Billy Ray Cyrus before they collectively came together for the end of the song.

Fellow rapper Nas then to took the stage with Lil Nas to close the epic star studded performance with”Rodeo.”

It was also a big milestone for South Korean boy band BTS. After making history as the first K-pop band to present at the Grammys last year, the group performed on the stage for the first time at the show on Sunday night.

The seven-member group was nominated for a Grammy last year, but fans were disappointed to find out that they were not nominated this year in any category. Like Nas, BTS broke records in 2019, having a third No. 1 album in the U.S., an accomplishment only matched by The Beatles, and sold out stadiums across the globe. Despite the Grammy snub, the band was inducted into the Recording Academy as voting members and their suits from the Grammy Awards will be displayed in L.A.’s Grammy Museum.

Lil Nas X led all male nominees on music’s biggest night with six nods, including best new artist, album of the year and song of the year.

The rapper, who spent a record-breaking 19 weeks at No. 1 with “Old Town Road,” dominated music headlines this past year. Not only did “Old Town Road” bridge the gap between country and hip-hop, but Nas, on a more personal note, came out publicly as gay. “I hope my actions are enough to inspire other young LGBTQ children coming up to not be afraid to be themselves, but I feel pressure to be a role model for the community,” he recently told Variety.

“I hope to have an album done by the middle of next year, mostly because I want to go on tour,” he said. “This generation supports the artists themselves more than the music, and I want to meet my fans. I want to put together an actual show and not just do karaoke on stage.”