BTS Opens Up About the Past, Creativity and Inspiration for ‘Map of the Soul: 7’ (Watch) 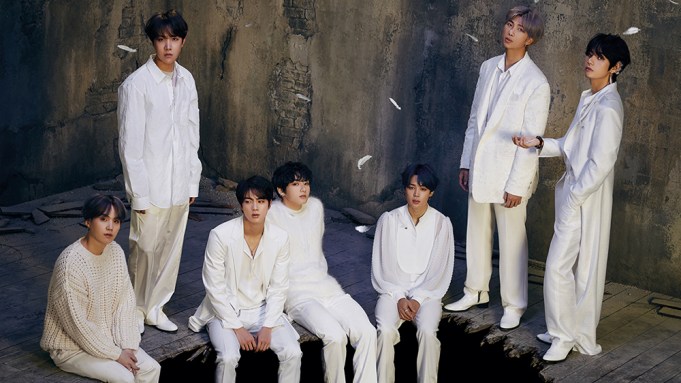 With a reported four million copies in worldwide pre-orders and their stars shining brighter than ever thanks to chart-topping albums and playing the world’s biggest stages, BTS’ just-released “Map of the Soul: 7” was sure to be a success no matter what it sounded like. But instead of resting on starpower, the record-breaking group decided to look inward and dig deeper than ever to share more of themselves through their music.

Released today (Feb. 21), “Map of the Soul: 7” sees the members of BTS continue to reveal their personal stories but with a heightened sense of self-awareness. From RM, J-Hope and Suga ridding themselves of anger from their detractors on “UGH!” to Jimin and V declaring themselves “soul mates” despite their differences on “Friends,” plus Jin’s heartfelt letter to fans on the soaring track “Moon,” and youngest member Jungkook reflecting on growing up in BTS on the euphoric “My Time,” these tracks are previously unseen sides of the member.

While they dreamed about this kind of success, BTS tell Variety they never expected to reach the level they’re at today and that led to questioning. But rather than looking outward or thinking they needed outside help, the guys trusted that continuing on the path they were already on was the right way to go. “Map of the Soul: 7” not only delivers the septet’s most personal tracks, but sees them referencing their past by rebooting and reworking the themes and ideas from early BTS songs to reflect their growth today. New single “ON” is a rework of the early BTS single “N.O,” while “We Are Bulletproof: the Eternal” acts as an extension of their 2013 single “We Are Bulletproof Pt. 2,” while album closer “Outro : Ego” samples parts of the intro from BTS’ debut album, “2 COOL 4 SKOOL.”

Watch above and read below for the members’ own views on the creative process that went into making “Map of the Soul: 7.”

What was the larger inspiration behind wanting to reference the past, while still needing to take it to the next level as artists?
Jin: We get inspiration from everywhere: We get it from the fans, we get it from each other, from ourselves.
Suga: And when it comes to this album, it’s called “[Map of the Soul:] 7.” We worked together for seven years, there’s seven of us. It’s a lot more than just inspiration, this album contains our stories.

BTS mania has reached another level this year. You didn’t just go back to “The Tonight Show,” you shut down Grand Central Station. What do you think about when preparing to roll out a new album?
RM: I think for the outside, that’s up to our label. We’ve just always been concentrating on the inside things: music, performance, practices. I think you know this the best but what we’re doing, no one’s ever done. Every time we release a new album, we always get a headache [thinking] like, “How do we promote this? How are we going to do this?” So, for example, we didn’t know how big Grand Central is. But the Jimmy Fallon is already so exciting while he’s doing all his shows, so then we see Jimmy and we think, “OK, this is a big thing.” We realized it then.

This feels like a real moment of reflection for you guys too. So many tracks are nods to past songs…
RM: Many things were not intended as far as our career. We didn’t know we would ever reach this kind of position. Of course, we dreamed, we wanted to get big, we wanted to go as high as we could, but we never expected this kind of energy, this kind of reaction all over the world. One day, we woke up and we were like, “Where are we?” When you don’t know where to go, I think the best way is to walk down the road you have been walking on. So, the reboot [songs] is the best way to reflect ourselves and figure out ourselves again: Where are we? What are we doing? Who were we in the past? And [who are we] right now? That’s how it happened.

Looking ahead, what is the next goal for you to achieve on your path?
Jimin: Hey, come on!!!
Suga: A Grammy nomination. A performance—
RM: Solo performance.
Suga: And, possibly, winning an award.

The album is still so fresh, just a few hours out. Do you have other messages you’d like to share on release day?
Suga: Please listen.
Jungkook: When you listen to this release, it contains our sincerity and our sincere messages.
J-Hope: I also want to say “please listen to it” because this album really gave me a chance to really think about myself and I put a lot of it into the music. When you listen to it you will learn a lot about us as well.
V: We also hope our music will give you a chance to heal yourself a little bit. Or even [help you] rest, reassure yourself or take a break.