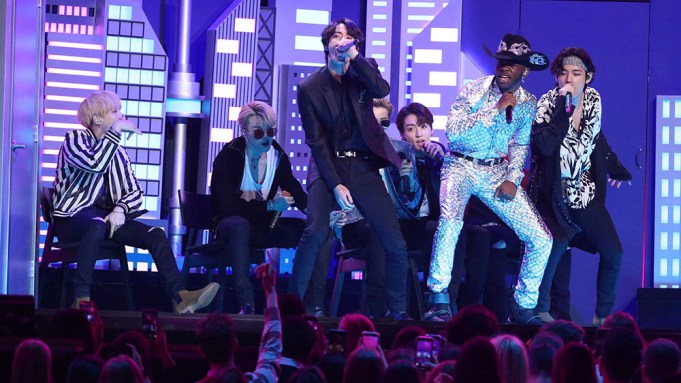 From Demi Lovato’s emotional comeback to the Grammy’s stage to Billie Eilish’s five award wins, this year’s ceremony honoring the best in music got Twitter talking.

Of the most memorable moments during the show, the internet praised Lovato (so choked-up that she had to start her performance over again) as she debuted her song “Anyone.” Meanwhile, ARMY swooned over selfies of BTS members, and Eilish scored a solid sweep of the top awards that had fans celebrating.

In a performance that received a standing ovation from the crowd, Lovato showed off her vocal chops on “Anyone,” which she described as a “cry for help” and was written just before her 2018 overdose.

Demi Lovato, overcome with tears, had to start her #Grammys performance over https://t.co/898TvP9HKQ pic.twitter.com/SSZGblzOvj

For 18-year-old Eilish, her five wins, including record of the year, album of the year, pop vocal album, song of the year and best new artist make her the youngest and only second musician in history to win in the big four categories. Eilish performed her ballad “When the Party’s Over” with her brother, Finneas, who also won producer of the year.

The most-tweeted about musicians were BTS, Lovato, Ariana Grande, Camila Cabello and Eilish. The top songs on Twitter Sunday night were Lil Nas X’s “Old Town Road,” Lovato’s “Anyone” and “Bad Guy” by Eilish, which won record of the year.

As for the most-retweeted posts from music’s biggest night, BTS wins again, with Lil Nas X, Tyler, the Creator and Shawn Mendes also making the list.

BTS’ Jin (real name Kim Seok-jin) posted a selfie in a tan blazer, which garnered over 400,000 retweets, with RM’s selfies following closely behind.

Tyler, the Creator, who donned his signature white wig for his fiery performance of “Earfquake” and “New Magic Wand” and won a Grammy for best rap album, tweeted “I GOT THE ‘WRAP IT UP NIGGA’ MUSIC IM SO HYPED ON THAT,” potentially referring to his acceptance speech, where music interrupted his speech.

Shawn Mendes took the time to thank designer Louis Vuitton for designing the three-piece red suit he wore to the event. “Thank you for designing this beautiful suit @LouisVuitton @virgilabloh !! @RecordingAcad,” he wrote.