Continue to Variety SKIP AD
You will be redirected back to your article in seconds
Feb 24, 2020 10:51am PT 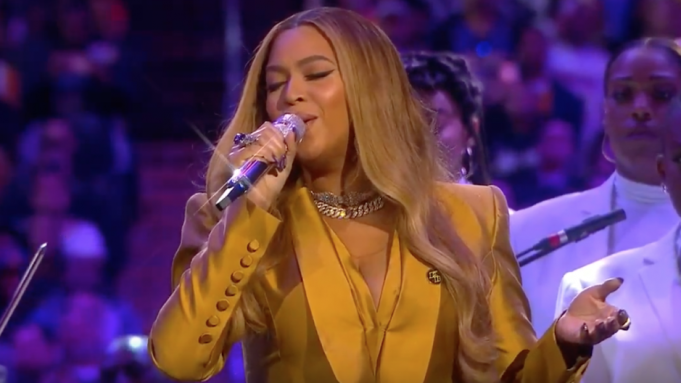 Beyonce kicked off Monday’s public memorial for Kobe Bryant with an emotional medley of her songs “XO” and “Halo.”

“I’m here because I love Kobe, and this is one of his favorite songs,” she said before launching into a special rendition of “XO.” She was accompanied by singers and a string quartet, and wore a gold pantsuit.

“I want to start that over,” Beyonce continued. “But I want us to do it all together, and I want you to sing it so loud that he hears your love.”

After the performance, the announcer at Staples Center praised Beyonce for “expressing her love [for Bryant] so beautifully.”

The two songs are similar in feel and theme — and indeed, both were cowritten by Beyonce and Onerepublic frontman Ryan Tedder. “XO” is featured on Beyonce’s self-titled 2013 album and was cowritten by the pair with Terius “The-Dream” Nash, while “Halo” comes from her 2009 album “I Am… Sasha Fierce” and was written by Beyonce and Tedder with Evan Bogart. “Halo” peaked at No. 5 on the Billboard Hot 100 and remained on that chart for 30 weeks in 2009. While “XO” was not as big of a radio hit — reaching No. 45 on the Hot 100 — it did well on other charts, reaching Silver status in the U.K. (for 200,000 sales) and No. 12 on the Hot R&B/Hip-Hop chart in the U.S.

Bryant, his daughter Gianna, and seven others were killed on Jan. 26 in a helicopter crash.

The ceremony, called “A Celebration of Life,” also featured a performance of Beethoven’s “Moonlight Sonata,” by Alicia Keys, as well as speeches from Jimmy Kimmel, who emceed the event, Michael Jordan and Vanessa Bryant, among others.