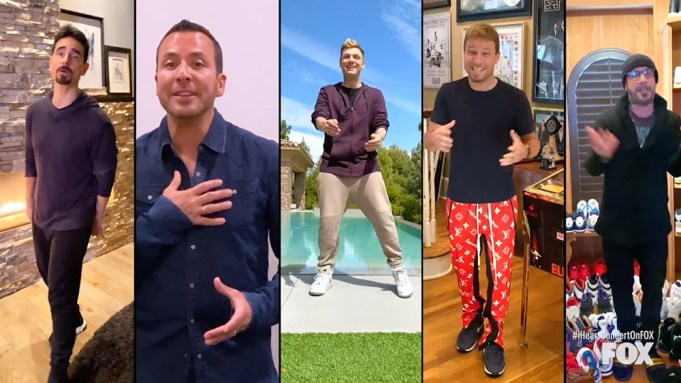 As much of the world stays home to stop the spread of coronavirus, the Backstreet Boys reunited via video chat to belt a “socially distanced” rendition of their hit song “I Want It That Way.”

The performance was part of Fox’s iHeart Living Room Concert for America, a music event hosted Sunday night by Elton John to provide entertainment relief and support for those helping to fight the global health crisis.

The Backstreet Boys — consisting of AJ McLean, Howie Dorough, Nick Carter, Brian Littrell and Kevin Richardson — serenaded viewers with the nostalgic tune from their separate homes. The pre-recorded video featured a guest appearance from Richardson’s kids, who joined him to assist on the drums and guitar. Carter also brought his son for a cameo at the end while he sang by the pool.

After the concert, the band took to social media and wrote “Honored we could be part of this incredible event.”

Honored we could be part of this incredible event ❤️ Thank you @iHeartRadio @foxtv! #iHeartConcertOnFox

Donations raised during the event will benefit Feeding America and the First Responders Children’s Foundation. Both organizations are helping families that have been impacted by the coronavirus pandemic.