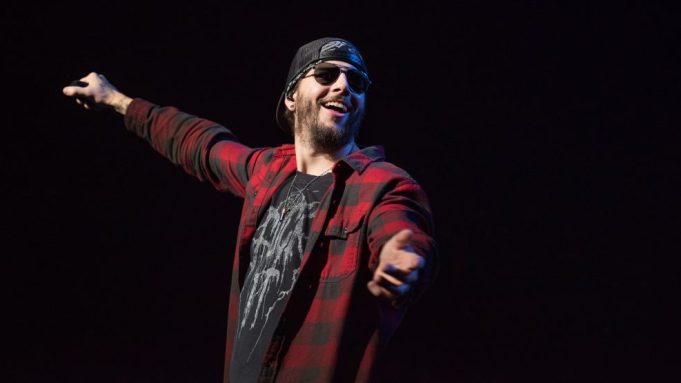 M. Shadows, frontman for the band Avenged Sevenfold, has written an eloquent essay in which he pleads for rock and metal fans to consider getting behind Black Lives Matter, offering an argument against the “all lives matter” comeback and expressing regrets over some of his own past imagery or attitudes.

The rocker’s 900-word appeal for racial understanding was published Wednesday on the website for Revolver, the magazine that specializes in metal and other especially aggro forms of rock ‘n’ roll.

“I have no interest in sending a neutral message proclaiming ‘riots aren’t the answer’ or ‘hurting innocent people doesn’t help the cause’,” Shadows writes. “We all recognize that, and if that’s the only message you are focused on during this dire time, then I ask you to dig deeper.”

Shadows mentions some of the key African American friends and family members in his life, including his best friend, brother-in-law, nephew and some of the key support personnel behind Avenged Sevenfold.

“The off-handed comments I’ve heard behind their backs should make any decent person sick to their stomach. The dirty looks, the mumblings, the drive-by taunts. This is just part of their daily lives, and somehow, they take it on the chin and carry on. It’s normal to them. To my white friends, can you imagine living like that for a moment? It’s horrifying and unfair. Hell, I took my brother-in-law to a Slipknot show a couple years back (his fav band) and the tension of a black man being in that crowd was palpable. Which brings me to my point.

“If you are white and have been sitting on the sidelines of this situation,” he continues, “we need you to stand up. Taking a stand for our fellow Americans does not mean you condone the riots. It simply means you are listening and want to help. If you posted in opposition of the riots yet were previously silent on the deaths of Ahmaud Arbery, George Floyd and Breonna Taylor, among too many others, please ask yourself why.”

Shadows acknowledges that he’s speaking to a fan base that doesn’t even begin to approach being integrated.

“I understand that the Avenged Sevenfold fanbase is made up of very few black Americans,” the singer writes. “We can be the ones — the rock and metal community — to reach out and show the compassion that I know is in us all to help raise up our fellow humans. I, for one, enjoy black American culture. The music, art, films, clothing, sports, food. All of it has made my life better. I have no doubt we are a better country because of the black American influence. Hell, Chuck Berry was the Father of Rock & Roll! Standing against inequality and systemic racism is the very least we can all do.”

At the finish, Shadows offers an apologia, if not precisely an apology, for past immaturities: “I am aware that in the past Avenged has antagonized with some of our lyrics and imagery. We have also used confederate flags in our artwork while paying tribute to artists we grew up listening to or simply trying to start controversy. I’m sure we will be called out, and rightfully so, by people reading this. No excuses. But everyone grows up at some point, and I feel grateful that we have an audience that has allowed us to evolve with them. I can only hope that the rock and metal community, and the white community at large, can move forward with an open mind and come together to help out our fellow Americans in this desperate time.”

Shadows’ plea was well received by many on Twitter, although there were frequent citations of more hostile messages on other forums. Among the responses: “Throw your horns up if you’re against racism.” “Avenged Sevenfold standing in solidarity with black lives matter and simultaneously pissing off all the racist people hiding in the metal scene — give me more of that, inject that into my veins.” “Especially since they had some questionable imagery/lyrics earlier in their discog, some real growth shown by Shadows and i assume the rest of the group.” “They definitely skirted the line of political ambiguity for a long time, i think a lot of it was due to blowing up as a band directly around the time of post 9/11 nationalism but you can see their progression as a band ideologically.”

Hats off to Avenged Sevenfold for ruining every racist metalhead’s day https://t.co/Dw3RgELmKF

Say what you will about Avenged, but if a band with a huge military fan base gets it, there's no excuse – Avenged Sevenfold's M. Shadows: Why I Stand With the "Black Lives Matter" Movement https://t.co/YSFx6yyKDx

Avenged Sevenfold is the band that got me into playing guitar and making music. So happy to see a genuine message from their lead singer. The confederate flag in some of the art did bother me at a time and I appreciate the acknowledgement of the problem and the Apology. https://t.co/JwvY1sPofM