Andy Samberg, a Kate Bush Superfan, Says Getting Her Song for ‘Palm Springs’ Was Critical 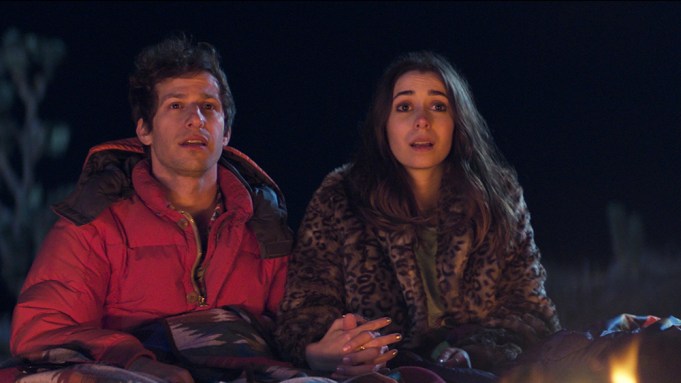 In Hulu’s “Palm Springs,” Andy Samberg can’t escape a time loop, reliving the same wedding day over and over. Fortunately, he also relives a catchy soundtrack that includes cult favorites like Gene Clark’s “No Other,” Leonard Cohen’s “The Partisan” and Gram Parsons’ “In My Hour of Darkness” making their way into the loop.

For their latest edition of Pandora Stories — a playlist that includes track-by-track introductions —  Samberg, writer Andy Siara and director Max Barbakow gather to discuss the music that gives “Palm Springs” its desert vibe.

“When we were making this movie we definitely wanted there to be a specific musical vibe to the soundtrack,” explains Samberg, who stars as Nyles opposite love interest Cristin Milioti, and was also a producer. “We agreed that we wanted it to be something that was catchy and hooky but not necessarily modern stuff we loved … not stuff from the present day. And also songs that are classics, but not necessarily the ones you’ve heard too many times already.”

Of his personal picks, Samberg gushes, “Cloudbusting” by Kate Bush is “one of the best songs ever made… I love Kate Bush… I had this vision of this moment and this song and it sort of all coming together and it just made me feel very emotional and happy and made my brain tingle.”

The song was such an integral part of the scene that, in faith, Samberg had it written into the script, then made a personal appeal to Bush to try to secure the rights to use the track. “I wrote a letter to Kate Bush. I don’t know if she read it. If she did and this gets back to her somehow: ‘Thank you, Kate, so much. You’re a genius!’ If she never read it, all the same, I’m just so thrilled and happy that we got to put it in the movie. It elevates the moment so much. The moment in the movie was really designed for the song.”

Listen to their stories about the songs of “Palm Springs” in Pandora Stories, below: