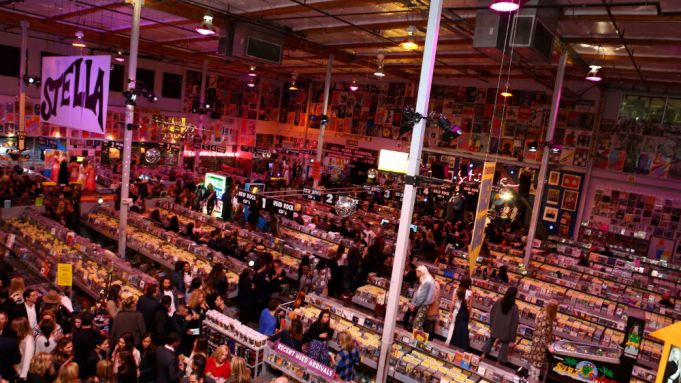 Amoeba Music, L.A.’s foremost outpost for CDs, Blu-Rays, DVDs, vinyl and other physical media, has broken the suspense over its future by having hip-hop star Tyler, the Creator appear in a video announcing its new location on Hollywood Blvd.

This fall, the store will move just a bit northeast from its current location at the intersection of Sunset and Cahuenga to 6200 Hollywood Blvd. At the corner of that other famous boulevard and Argyle, Amoeba will setting up shop in the neighborhood known for the Pantages and Fonda theaters and Capitol Records … not to mention the Frolic Room, a place that may be about to get busier than it already is.

The long-standing question, ever since Amoeba announced it would need to leave its soon-to-be-demolished home: Would the new location be smaller? “It’s a bit smaller, but not a whole lot… It’s still a huge space that will house all the formats and goodies we carry now. We will remain a Hollywood institution,” says an FAQ on the store’s website.

The store will now be on a single level, instead of spread across two, on the ground floor of the new El Centro complex. The opening will take place some time after Labor Day.

In answer to what’s likely to really be the most frequently asked question — at least for anyone already familiar with trying to park in that neighborhood: The store will have “a large, well-managed parking garage, and we’ll validate for the first 75 minutes with any in-store purchase.”

In the video announcement, Tyler, the Creator tours the still-empty space and says he’s been in love with the place ever since they let him do a photo shoot on the roof of the current location.

After long serving the Bay Area with two stores, Amoeba opened on Sunset in 2001, quickly becoming a major competitor to Tower Records and other long-gone meccas for CDs and DVDs. The company sold the building in 2015 for $34 million. A 26-story mixed use complex is set to go up on the site after Amoeba moves out. The Los Angeles City Council approved a zoning change for the block last June.