Amid the Pandemic, Soledad O’Brien and Sheryl Crow Find Inspiration in Others’ Ingenuity

In conversation with Salesforce’s Stephanie Buscemi, the pair say the creativity and spirit of service that’s emerged in the world gives them hope. 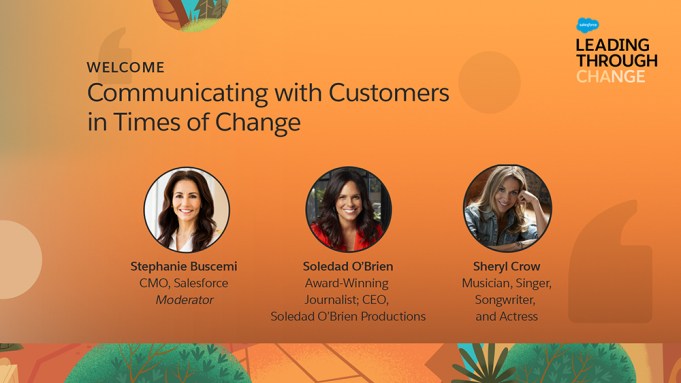 In just a few months, the COVID-19 pandemic has transformed life for much of the world. Work, communication, parenting, shopping and even eating have been profoundly altered.

While millions have been deprived of their livelihoods and almost everyone has had to learn a new routine, many have begun to catch their breath and look at what’s next.

For journalist and entrepreneur Soledad O’Brien, singer-songwriter Sheryl Crow and the top leaders at Salesforce, that means finding creative ways to help each other both at home and on the job.

In a webcast from Salesforce’s “Leading Through Change” series, Stephanie Buscemi, Executive VP and Chief Marketing Officer of Salesforce, led conversations with O’Brien and Crow. All three hailed the ingenuity and kindness they see emerging in the world.

O’Brien says that what’s emerging is “amazing, but in a different way” from what we knew before.

“One of the big challenges is in adapting,” she told Buscemi. “All the [late night] shows, after taking a couple of weeks to figure it out, have come up with systems.” Talk shows quickly adopted streaming video for their hosts. Schools and parents have adopted videoconferencing to facilitate homeschooling, and O’Brien’s own company has improvised ways to handle remote shooting, whether it’s her on camera or an interview subject.

She is CEO of Soledad O’Brien Productions, an 11-person company that is currently shooting a documentary in Seattle on COVID-19. “How do you tell a story when you can’t sit next to somebody? Well, guess what: The quality of the [web] video is great and people can shoot themselves now. That opens up a whole lot of new pathways.”

The bottom line, she says, is “I need all my employees to work,” she says, “because what nobody needs in a pandemic is to lose their source of cash.

“Okay, sure, maybe I have to have my 10-year-old hold up the light, but we’re going to be able to create content in creative ways, because we’ve got to get that show back on the air,” she adds, “because you actually need to keep everybody working.”

Likewise, social distancing and work-from-home have inspired Salesforce employees to find new ways to be helpful to one another, says Buscemi.

“We have a responsibility to give back to one another and to look out for one another at the local, national and global levels. We’re doing that here at Salesforce… We’re contributing medical masks to healthcare systems around the world and we’re also making some of our technology available for free to help our customers and partners navigate through the crisis.” In addition, she says, she’s been moved by “seeing [Salesforce employees] just be their very best selves right now, rising to the occasion and doing things that they thought maybe they couldn’t do, and not only do them but do them amazingly well. So it’s really great to see people just step up in crisis.”

While O’Brien’s company is much smaller, her team has also found creative ways to help each other.

“We now have a chain of people who read books to friends who’ve got little kids,” says O’Brien, “so that mom can go shower for half an hour… There’s so many ways in which I’ve seen people kind of leverage the thing that they can do.”

“Someone said that to me when I started as CEO of my company. They’re like, ‘Your job is an environment. You create an environment.’ You’re home and you have kids, you have an environment and you’re responsible for that.” Though she is a journalist and documentarian, one of her tips for having a sane structure during work-from-home: limit news consumption and stick to hard, reliable information. “Then I think you’re far ahead in terms of being able to lead, whether it’s leading a bunch of 12 year olds or leading an entire team.

Of her own home, she says, “I’m a Virgo, so we like lists. … I have four kids and a husband, and getting everybody on a plan, on a routine. Our day is not going to be a free-for-all. Our day is going to have some kind of a shape.”

She starts her work day with a company video meeting. “Everybody talks about where they are [and] what they’re wearing,” O’Brien says, adding that a little light ribbing also helps. “Most everybody’s in sweatpants from the bottom down. … Everyone [talks] about how they’re feeling, and how they’re doing, and what they made last night. I was utterly abused because I fed people chicken nuggets. But it’s just a way to connect.”

During stay-at-home, Crow has been sheltering with her two sons. “It’s been fascinating to watch brothers become friends,” she says. “They’ve had to find things to do, and I’ve always believed that boredom was the greatest proponent for creativity.”

“Now they literally are using boredom to figure out ways to create worlds around them, and I think ultimately this is going to really serve the future,” Crow adds. “It’s going to serve not only people’s idea of how to be part of a community again… but also I think it’s going to translate hopefully into their adulthood, where service is not something that you get assigned to at school, it’s something that you do because your heart is telling you this is food for the spirit, and this is how we continue to navigate our own wellbeing.

Crow says all the ways she’s witnessed innovative individuals extend a helping hand has given her hope for mankind.

“The way people have been creative in finding ways to not only be useful, but to make every moment count is so inspiring,” she says. “This is the weirdest time I’ve ever experienced in my life, and I know that’s probably how most people are feeling. But it’s been really inspiring to see people thinking about other people and how they can serve.”

View Buscemi’s full conversation with O’Brien and Crow above. For more of the “Leading Through Change” series, go to salesforce.com/blog.