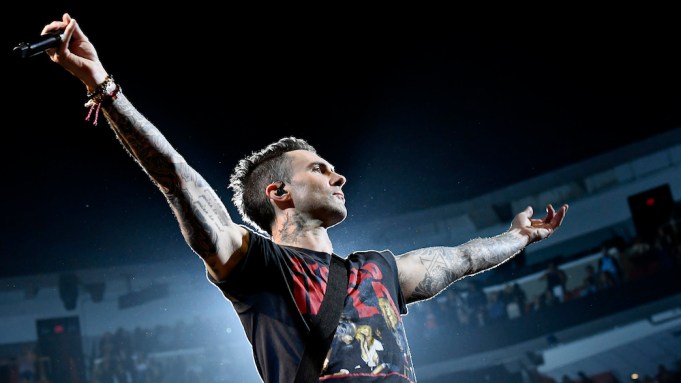 Dan + Shay and Maroon 5 performed at Miami’s American Airlines Arena on Super Bowl Sunday eve, but while the game was on everyone’s minds, so was the recent death of Kobe Bryant.

The country music duo opened the evening, billed as the Bud Light Super Bowl Music Fest, playing for the first time since winning two Grammys, with a hit-heavy set that included crowd favorites “10,000 Hours,” “Tequila” and “Speechless.” Demi Lovato joined in on “Speechless,” making her first appearance on stage since her emotional performance at the Grammys on Jan. 26, and the last one before hitting the field at the Hard Rock Stadium where she will be singing the National Anthem ahead of the big game.

Maroon 5’s Adam Levine made his entrance wearing a Guns N’ Roses shirt. Playing to 17,000 fans, the band kicked off with “What Lovers Do,” then delivered the hit songs “Payphone,” “This Love,” “Moves Like Jagger,” and “Animal,” among others.

Levine used the stage to recount his most important performance of 2019.

“One year ago I was getting ready to perform. I was stressed,” said Levine, who was front and center at last year’s Halftime Show during Super Bowl LIII, where Maroon 5 headlined joined by rappers Big Boi and Travis Scott.

A few songs into Maroon 5’s set, Levine held a Los Angeles Lakers no. 24 “Bryant” shirt and waved it at the crowd of screaming fans, while the stage turned purple for “Memories.”

“I don’t know if I’ll make it through this one with my emotions intact,” he said, inviting fans to sing along. The arena began chanting and echoing “Kobe.”

“Needless to say, I think we know who this song is dedicated to,” he added before beginning the performance and letting out tears, while sinking his face into his arm.

From performances to press conferences to parties, love for the Kobe Bryant family was felt throughout the city and people continue to mourn the fatal helicopter crash that took the basketball star’s life along with his 13 year-old daughter.