Pussycat Dolls Return With ‘React,’ Their First New Single and Video in a Decade 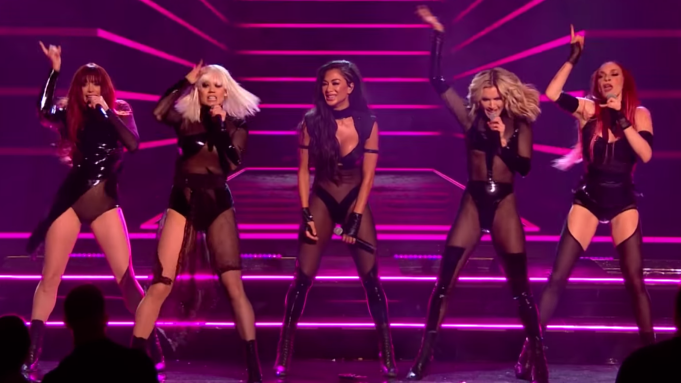 The video features Nicole Scherzinger, Jessica Sutta, Kimberly Wyatt, Ashley Roberts and Carmit Bachar, and in true PCD form is a throwback to everything fans loved about them in the first place: great choreography and a killer tune with electro-pop influences and a powerful dance beat. Reminiscent of their 2005 video for “Buttons,” the PCD display their fiery hot moves amid flames, water and, most dangerous of all, chairs.

“React” marks the first single for the group since they disbanded in 2010. Hits from the group’s first era include “When I Grow Up” and “Stickwitu.” After they disbanded, Scherzinger released her solo album “Killer Love” and currently serves as a judge on Fox’s “The Masked Singer.”

Scherzinger hinted at a possible reunion back in 2017 when she and the other Dolls teased a warm-up to “Buttons” at Robin Antin’s Dance studio Playground in Los Angeles, setting the rumor mill turning.

Last November the group officially reunited and performed “React” for the first time on the UK show “X Factor: Celebrity.” Following the performance, the group announced plans for their Unfinished Business tour which will see them play venues across the UK and Australia with US dates planned for later in the year.

In addition to the new single and video, the group are working on a soon-to-be-released album of new songs.

The only notable absence from the reunited Pussycat Dolls is singer Melody Thornton.

Lead singer Scherzinger wrote on Twitter, “This video is for all of the fans – thank you for your patience and sticking by us all these years.”