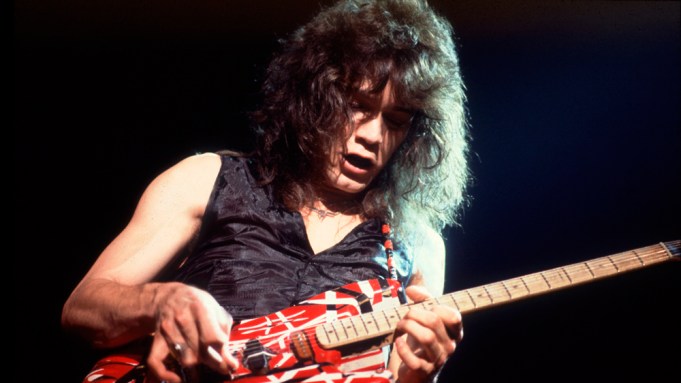 The range of musicians, actors, directors and creatives around the globe publicly mourning the loss of legendary guitarist Eddie Van Halen demonstrates how far his music and his talent reached. In the hour after his death was announced, Twitter was filled with tributes not just from musicians like former bandmate Sammy Hagar, Motley Crue’s Nikki Sixx, Lenny Kravitz and Billy Idol, but also director and fellow Californian Ava DuVernay (posted a video tribute) and even “Star Wars” actor Mark Hamill.

His son, Wolfgang Van Halen, posted this tribute on trailer. “He was the best father I could ever ask for. Every moment I’ve shared with him on and off stage was a gift.” His mother Valerie Bertinelli, who was married to Eddie from 1981 to 2007 retweeted Wolfgang’s statement.

Bandmate David Lee Roth tweeted a black-and-white photo of him with Van Halen, with the simple caption “What a Long Great Trip It’s Been.”

What a Long Great Trip It’s Been.. pic.twitter.com/M5pmkVi7hW

Former frontman Sammy Hagar posted a picture on a plane with Van Halen stating he was “heartbroken and speechless.”

Heartbroken and speechless. My love to the family. pic.twitter.com/MQMueMF2XO

Kiss cofounder Gene Simmons, an early booster of Van Halen, said “Eddie was not only a guitar god, but a genuinely beautiful soul.”

My heart is broken. Eddie was not only a Guitar God, but a genuinely beautiful soul. Rest in peace, Eddie! …Eddie Van Halen Dead at 65 from Cancer https://t.co/gITtcndQVv

Crushed. So fucking crushed. RIP Eddie Van Halen. You changed our world. You were the Mozart of rock guitar. Travel safe rockstar.

Billy Idol posted a collage of images of the two together and Van Halen performing on stage. “We will miss you” he wrote.

Oh man, bless his beautiful creative heart. I love you Eddie Van Halen, an LA boy, a true rocker. I hope you jam with Jimi tonight. Break through to the other side my brother. ❤️❤️❤️ https://t.co/XpcTlPJq9A

Black Sabbath cofounders Tony Iommi and Geezer Butler, who had the bad luck to have Van Halen open for them in 1978, paid tribute as well:

I’m just devastated to hear the news of the passing of my dear friend Eddie Van Halen. He fought a long and hard battle with his cancer right to the very end. Eddie was one of a very special kind of person, a really great friend. Rest In Peace my dear friend till we meet again. pic.twitter.com/Qs8tsLPANJ

Just when I thought 2020 couldn't get any worse, I hear Eddie Van Halen has passed. So shocking- One of the nicest, down to Earth men I have ever met and toured with. A true gent and true genius. RIP. So sad.Thoughts go out to his brother Alex, and his family. pic.twitter.com/fwIw040YMX

Metallica, who did a U.S. stadium tour with Van Halen in 1988, paid collective tribute:

We are enormously saddened to hear about the untimely passing of Eddie Van Halen. We considered him an inspiration, an idol, and after spending a summer together on the road in '88, a friend. Sending love to Alex, @wolfvanhalen & everyone in the greater VH family.

Queen guitarist Brian May, who enlisted Eddie for his Star Fleet project in the early ’80s, credited him with a “new kind of playing.”

Completely gutted to hear the sad news. This wonderful man was way too young to be taken. What a talent – what a legacy – probably the most original and dazzling rock guitarist in History. I think of him as a boy – an innocent prodigy – always full of joy, always modest – and those truly magical fingers opened a door to a new kind of playing. I treasure the moments we shared. His passing leaves a giant hole in my heart. RIP Ed Van Halen. Bri

Country superstar Keith Urban, who’s heralded as one of the premiere guitar players in the genre, wrote, “This hit me hard. There are lots of great guitar players in the world, but very, VERY few true innovators. Players who seem to have arrived from a far distant planet , and who bring a completely new color to the rainbow. Eddie Van Halen was this and so much more. Even without the finger tapping, you had a player with extraordinary touch, tone, and a rhythmic pocket and bounce that floated like Ali in the ring. He was a master of complex solos that spoke to non-musicians… THAT IS HARD TO DO. The reason was the exquisite melody in his heart, and the joy in his soul of playing FOR people – and it came through like a ray of sun we ALL felt.”

Director and producer Ava DuVernay posted a broken heart and a live performance of “Love Walks In.”

Mark Hamill replied to Wolfgang’s announcement of his father’s passing, urging him to “take solace in knowing that he will be long remembered and live on forever as one of Rock’s most extraordinary guitar virtuosos.”

So sorry for your tragic loss @WolfVanHalen, but take solace in knowing that he will be long remembered and live on forever as one of Rock's most extraordinary guitar virtuosos. Condolences to you, Valerie @Wolfiesmom and the entire Van Halen family.#RIPEdward https://t.co/XWoCe8nrZv

Rage Against the Machine guitarist Tom Morello called Van Halen “one of the greatest musicians in the history of mankind.”

https://t.co/QjAj45KED8 Apex talent. An unparalleled titan in the annals of rock n roll. One of the greatest musicians in the history of mankind. Rest In Peace, King Edward

Beach Boys cofounder and songwriter Brian Wilson weighed in about his fellow Angeleno.

I just heard about Eddie Van Halen and I feel terrible about it. Eddie was such a great guitarist and I remember how big Van Halen was, especially here in L.A. Love and Mercy to Eddie’s family & friends. pic.twitter.com/PY8fyrx1Lu

I am devastated at the news of the passing of my friend Eddie Van Halen. pic.twitter.com/hUyIdKXsdG

Just when you think 2020 couldn’t suck more. What is there to say about Eddie except he changed the face of rock music. I’ll never forget the first time I heard Eruption as a teen. My mind never recovered. RIP Eddie. And also Rest In Rock. 🤟 https://t.co/DtcbFPfx7k

Skid Row frontman and “Gilmore Girls” actor Sebastian Bach looked back on the double loss the music world faced in 2020 “Eddie Van Halen and Neil Peart were just too good for 2020,” Bach wrote.

Eddie Van Halen and Neil Peart were just too good for 2020.
We all are
My heart is broken

The world lost an icon, innovator, showman, virtuoso, master songwriter and perhaps one of the biggest inspirations ever to learn how to play guitar. Heartbroken to hear of Eddie Van Halen’s passing. Our love, condolences and best wishes to his his family, friends and fans. #RIP pic.twitter.com/pGhPUXRzyb

I will be playing your fathers music all day today and reminiscing of all the amazing memories #VanHalen brought to my life. Condolences to your family and the family of fellow fans.

“Gremlins” actor Zach Galligan reminisced about a backstage encounter with the legend.

I met him in '93 in Irvine after a show. Super nice guy, actually gave me a hug. Total legend and one of the best guitar players EVER. RIP, dude, we'll never have another like you.