Composer Ludwig Göransson also has an Emmy companion for his Oscar and three Grammys. 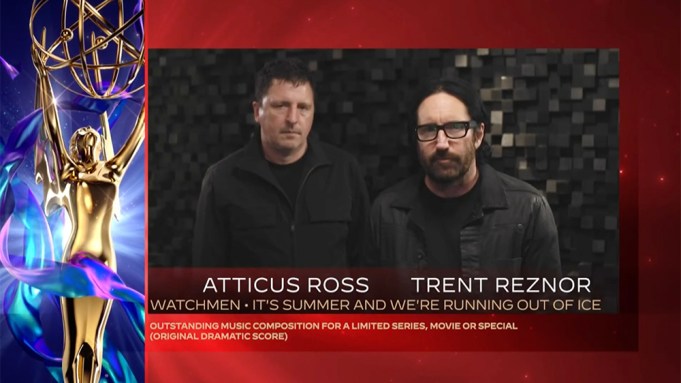 Updated: Composer Ludwig Göransson now has an Emmy companion for his Oscar and three Grammys, winning Saturday night for his music for HBO’s “Star Wars” spinoff “The Mandalorian.”

It was his first Emmy nomination and win, keeping alive his winning streak for copping the Oscar and Grammy for “Black Panther” and two more Grammys for Record and Song of the Year last year. “The Mandalorian” won for Music Composition for a Series, beating out “The Crown,” “Euphoria,” “Ozark” and “Succession.”

Like his fellow composers Trent Reznor and Atticus Ross, who won the Emmy Thursday night for Music Composition for a Limited Series for “Watchmen,” the Swedish-born Göransson, 36, is now just one award – the Tony – away from the EGOT, the ultimate show-biz crown.

Göransson apparently did not submit a video “acceptance speech,” unlike most of this week’s Creative Arts Emmy winners.

Accepting remotely (as did all of the Emmy winners) Reznor said: “We’re very proud to be involved with a show that’s relevant, smart and daring. We were changed and affected by working on this, and it’s great to see it resonate with the world at large.” He thanked creator Damon Lindelof for “providing us such a broad canvas to paint on.”

The Thursday-night winners also included British singer-songwriter Labrinth, honored for his song “All for Us,” showcased in in the finale of HBO’s “Euphoria,” sung by Zendaya along with a huge choir and drumline.

For the third consecutive year, “The Marvelous Mrs. Maisel” won in the music supervision category. Music supervisor Robin Urdang shared the award with series creator Amy Sherman-Palladino and producer Daniel Palladino, as she has each year.

“Maisel” has now won three of the four Emmys given in the category, which is only four years old. This year’s award was for the fifth episode of the third season, which offered period 1960s tunes for Lenny Bruce on Miami TV and new character Shy Baldwin as a Motown-style performer for whom comedian Midge (Rachel Brosnahan) opens.

Composer Nathan Barr won his first Emmy in the main-title theme category for “Hollywood,” Ryan Murphy’s Netflix series about post-World War II wannabes in the movie business. He was nominated for two other Emmys this year, including another in the same category (“Carnival Row”) and for a score in the “Hollywood” series.

Earlier in the week, composer Laura Karpman won her first prime-time Emmy in the documentary score category for “Why We Hate,” a six-part Discovery Channel series about hatred around the globe. Karpman has four previous News and Documentary Emmys for her scoring for the PBS series “The Living Edens.”