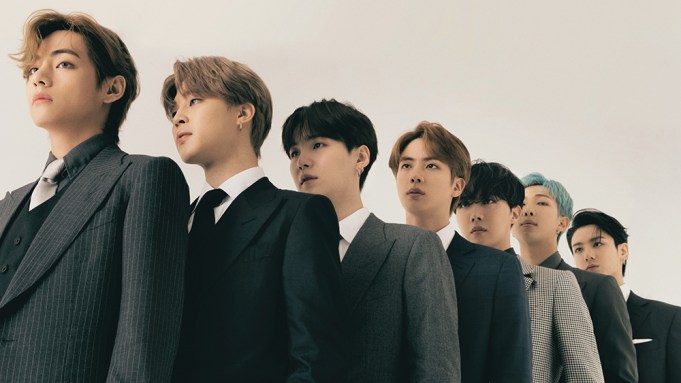 K-pop supergroup BTS is coming to the cover of Variety magazine for this year’s Grammy issue.

You can buy a special digital edition of Variety with all the BTS content and photos for $4 at the link here. You can buy a physical copy, which includes the entire Variety magazine, for $9 here.

This year is poised to be the biggest in BTS’ history. The group released their first all-English single “Dynamite,” which returned to a third week on top of the Billboard Hot 100 songs chart. With that accomplishment, BTS became the first group to ever have the top song on the Hot 100, Global 200 and Global 200 Excl. U.S. at the same time.

Big Hit Entertainment, the entertainment company behind BTS, is also set to land the biggest stock market listing in the last three years in their native country of South Korea. Each of the seven members of the group will soon holds shares worth $7.9 million at their issue price.

Here’s a preview of what’s to come:

On singing in English on “Dynamite”:

RM: When we first listened to the “Dynamite” demo, I actually tried different titles or lyrics in Korean. I tried to write some rap on that track, but nothing worked out really well. So, ok, well, why not keep it this way? Let’s give it a shot! It’s 2020, why not do some crazy things?

Jung Kook: It was an unfamiliar experience to record and sing this song in English. We had to practice the pronunciation a lot to try and make sure that the feel and emotions of the lyrics were really reflected when we sang it. We translated the lyrics into Korean and read them very carefully. We thought about what they meant in Korean as we recorded them into English.

j-hope: Pop music in English is really what we grew up listening to. English songs are not something unfamiliar to us — we are used to them. But the feelings that go into writing songs in English is very different from what goes into writing them in Korean, so this was still something new. It required a lot of work, especially on the pronunciation, and a lot of practice.