BTS Album ‘BE’ Intended as Message of Hope in Difficult Year 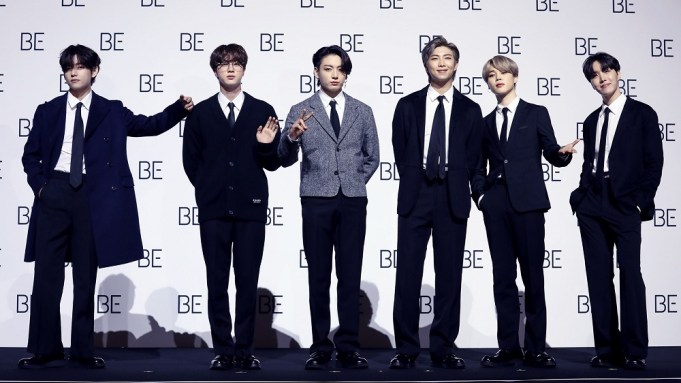 The announcement was made at an online press conference that was live-streamed via YouTube and the Big Hit Labels channel. The live stream kicked off with a video of the band members filing past and checking themselves in a mirror.

That led in to an in-person press conference from Korea – with band member Suga missing. He was said to be recovering from a recent procedure.

RM said that the album had been planned before the release of hit single “Dynamite” and that it was made over a period of several months. The album was made in “a collaborative process with fans,” RM said. “We all learned how to use new cameras.”

“The name ‘Be’ is verb, it is a very open concept,” said Jimin, who took on the role of music project manager. “In our discussions ‘life goes on’ came up as a recurring idea.”

“Life Goes On” is also the name of the album’s opening track. RM said it shared the same roots as “Dynamite,” but was “a little more weighty, sincere and soft.”

Band member V was assigned as visual director for the album project. RM provided the idea of taking photos of their rooms and using that as part of the package.

Pre-orders for the new album began on Sept. 28. It was previously announced that the album’s lead single would be “Life Goes On” and that the track would have its first performance at the American Music Awards on Nov. 22.

The album is the group’s fifth Korean-language album, and the second of 2020, after dropping “Map of the Soul 7” in February.

It has been a busy year for the group, despite the disruption of the COVID-19 pandemic, which curtailed their concert tour. Recent single “Dynamite” reached the number one spot on the Billboard Hot 100 chart.

“The pandemic unexpectedly put a lot of our original plans to a halt. However it provided us an opportunity to step back and focus on ourselves as well as our music. We reflected the emotions that we felt during this unprecedented period into this album. We were also able to take a step further by taking roles in overall production, such as concept development, composition and visual design,” Jimin told Rolling Stone India.