Broadway’s New Voices on How Theater Can Change the World 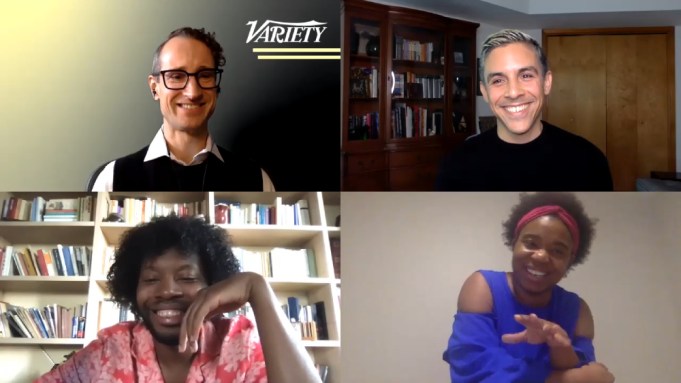 A while back, someone sent Katori Hall a link to her Wikipedia page, and Hall — the book writer of Broadway’s “Tina” and the creator and showrunner of Starz’ acclaimed series “P-Valley” — was surprised to see herself described as an activist.

Listen to this week’s “Stagecraft” podcast below:

But really, she recalled during Variety’s “New Voices of Broadway” panel with fellow playwrights Jeremy O. Harris (“Slave Play”) and Matthew López (“The Inheritance”), it shouldn’t have come as a shock to her. Activism is baked into why she writes.

“I have always written from a weirdly kind of selfless and altruistic place,” Hall said during the discussion, recorded as part of the digital event Legit! The Road Back to Broadway, presented by City National Bank. In the panel released as the latest episode of Variety’s theater podcast Stagecraft, Hall explained, “I came to the theater because I did not see myself onstage. At least I didn’t see this Black, Southern, country, curse-a-lot girl onstage, who was unapologetic about her Blackness and her Southern-ness. And so in writing myself, I began to represent a whole lot of different people, and not just Black Southern folks but people who felt like they also didn’t see themselves onstage.”

She continued, “As someone who knows that she is marginalized, I feel as though any opportunity I get, whether it’s the platform of the stage or the platform of the small screen, I have to represent. And I must say because of what is happening now, I feel that responsibility even more so. It’s almost like my mission statement.”

That was a sentiment echoed by Harris and López, too, during the discussion, in which the trio — among the highest-profile writers working on Broadway during the 2019-2020 season — not only discussed the ways that Broadway needs to change, but also addressed how the act of writing can change the world.

“I’ve always felt this responsibility that if I was going to be in the theater, I had to do theater the way the Greeks did it,” Harris said. “The theater of the Greeks was as much about civic responsibility as it was about anything else. It’s about people witnessing the world, responding to that world, and then maybe doing something to change it. That’s why the only people who could see it were people who could vote.”

Over the last several months, as the pandemic shut down theaters and a reckoning over racial justice has gripped the country, Harris said he began to think about his own responsibility to the theater artists unable to take care of themselves in this moment, and what he can do to sustain them and their work.

“I’m hoping that in the coming months and the coming years I can keep building on that, and hopefully find other allies in building on that, and create this huge coalition wherein we can be a self-sufficient, huge organism of a community that doesn’t just make the kind of musical that people see and ignore and it does nothing to change anything about the status quo,” he explained. “We’ll be making more work that challenges people’s ideas of how they see the world they’re living in.”

López also said he’s always been actively engaged in the world; it’s central to the act of writing. At the moment, his advocacy work extends to the Broadway for Biden campaign, for which he’s hosting two virtual events.

To hear to the full panel discussion, listen at the link above, or download and subscribe to Stagecraft on podcast platforms including Apple Podcasts, Spotify, and the Broadway Podcast Network. New episodes of “Stagecraft” are released every other week.