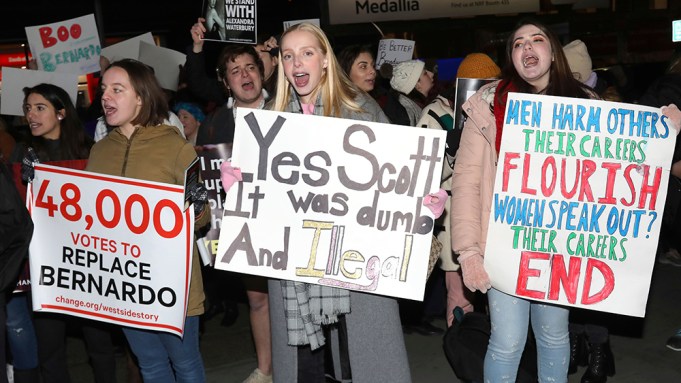 Roughly 100 protestors gathered outside the Broadway premiere of “West Side Story” on Thursday night, carrying placards and chanting in unison to demand the removal of cast member Amar Ramasar.

“Hey, hey, ho, ho, Ramasar has got to go,” they cried while holding signs that read “Keep predators off the stage,” “Sexual predators shouldn’t get leading roles on Broadway” and “A boy like that should not be on Broadway.”

These demonstrations have become a persistent occurrence outside the Broadway Theatre, where director Ivo van Hove’s radical revival of the classic 1957 stage musical is being performed.

The dozens of protestors braved the cold to decry the casting of Ramasar, who portrays Sharks gang leader Bernardo in the buzzy new rendition of the venerable story of forbidden love. Ramasar’s casting sparked controversy over his alleged involvement in a scandal that took place while he was a principal dancer at the New York City Ballet. In 2018, Ramasar was fired, then reinstated, from the company after being accused of sending sexually explicit photos of his girlfriend to another dancer.

The demonstration outside the theater were the brainchild of Paige Levy, a 17-year-old high school student and aspiring performer. “Even if he’s not removed, we’ve started a conversation that they can’t stop,” Levy told Variety on Thursday.

Despite protests, the show’s producers have refused to dismiss Ramasar. “There is zero consideration being given to his potentially being terminated from this workplace,” producers said in a statement last week.

Ramasar has also received the support of his girlfriend, Alexa Maxwell, who has said she has forgiven him for sharing the photos. His initial removal from New York City Ballet was sparked by a lawsuit filed by Alexandra Waterbury, a former student of the School of American Ballet who sued her ex-boyfriend Chase Finlay, a principal dancer who shared other explicit images of her with Ramasar and others. Ramasar and another company member, Zachary Catazaro, were also named in her lawsuit.

Waterbury, who was also at Thursday’s protest, told Variety that she was upset that the producers had decided not to take any action against Ramasar.

“I was furious,” she said. “It was last Friday and I showed up here and just screamed the entire time.”

Waterbury said she hopes that the protests will depress ticket sales and pressure producers to change their minds. “If people aren’t coming specifically because of [Ramasar’s] casting, maybe they will change, because clearly they’re only concerned with money,” she said.

Protesters at opening night of #WestSideStory are demanding the removal of cast member Amar Ramasar, who was involved in a #MeToo scandal pic.twitter.com/A8P1eOYvyS

Meghan Wasserman, a 29-year-old New Yorker, said she was motivated to join the demonstration because she is in the performing arts.

“This is our livelihood, and it’s important that our workplace is free from sexual harassment and sexual abuse,” she said.

“West Side Story,” which began previews in December, arrives on the Great White Way over 50 years after Stephen Sondheim’s original production. The latest adaptation puts a modern-day spin on the classic Romeo-and-Juliet love story set against the backdrop of a fatal rivalry between the Sharks and the Jets. Van Hove has dispensed with Jerome Robbins’ choreography, integrated video elements and excised the song “I Feel Pretty,” while cutting the three-hour show to less than two hours.

Opening night brought out stars including Liev Schreiber, Alec Baldwin and Vanessa Hudgens. After the curtain call, attendees trekked to the IAC Building, a modernist venue on the west side of Manhattan in Chelsea, where guests sipped themed cocktails, and noshed on empanadas and meatballs.