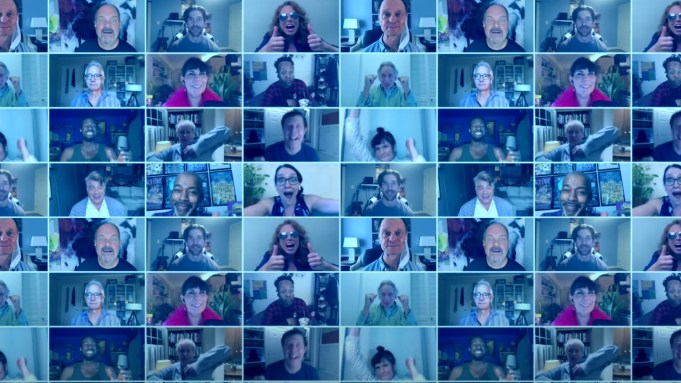 Some of Broadway’s biggest stars have united — in song, of course — to advocate for Joe Biden’s victory in the upcoming presidential election.

In a video titled “Bring Back Broadway: A Vote Blue Video,” 16 musical theater actors sing a voting-themed song based on “The Telephone Hour” from “Bye Bye Birdie” and “I Have Dreamed” from “The King & I.” The original lyrics were written by Joe Keenan.

In the five-minute video, the actors recall their quarantine experiences in song, mentioning how they have been “coaching voice online” with their “careers on the skids” due to the COVID-19 pandemic. They’re sick of scrabble, baking, Netflix, Hulu – and President Donald Trump.

The ensemble sings: “I’m so sick of it all (No plays!)/ But especially Trump (No shows!)/ So, I’m heeding the call (Long days!)/ Getting off of my rump (Tight clothes!)/ Gonna rise to the test (‘Cause he’s crazy!)/ Gonna roll up my sleeves (Trump is crazy!)/ And I ain’t gonna rest (Really crazy!)/ Till he finally leaves!”

They then advocate for Biden to win the election, employing catchy lyrics such as: “Trump has gotta go/ Cast your vote for Joe, If you want a show not on HBO” and “Trump’s in love with Kim/ Kim’s in love with him.”

Ed Goldschneider did the musical direction, vocal arrangements, piano and mixing; orchestration was provided by Bryan Blake; and Tristan Marzeski contributed drums and percussion. The video was edited by Rick Hip-Flores.

Watch the full video below.