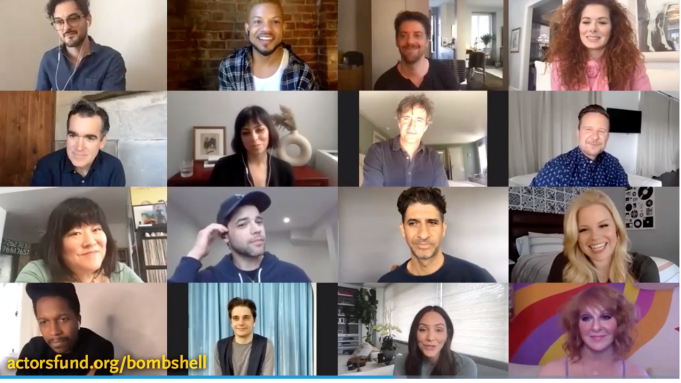 For the first time since the lights went out on “Smash,” the cast of the NBC musical drama gathered via videoconference Wednesday night to discuss the making of the series that has generated a cult following among theater fans.

The cast Q&A session was held as intermission entertainment during the live stream of the “Smash”-related “Bombshell in Concert” event as a fundraiser for the Actors Fund. The presentation started with an introduction by Renee Zellweger, who urged viewers to donate to the organization which helps performers in need.

“With the onset of the COVID-19 pandemic, which has brought Broadway to a complete stop, more and more people than ever are in need,” she said. “Since March 18, the fund and its industry partners have provided more than $12 million of support, but they estimate needing as much as $22 million to help people throughout the next few weeks alone. If you love ‘Smash’ or any of the performing arts, we need your help. Please give whatever you can, every little bit matters.”

“Smash,” which ran for two seasons in 2012 and 2013, follows the making of the fictional musical “Bombshell” about the life of Marilyn Monroe. The concept for the series came from Steven Spielberg, whose DreamWorks Television banner produced “Smash” with NBC. Tony and Grammy-award winning songwriters Marc Shaiman and Scott Wittman wrote an original song every week for the series.

In 2015, “Smash” cast members reunited for the live “Bombshell in Concert” production, which was also done as a fundraiser for the Actors Fund. On Wednesday, film of that concert was streamed via People magazine’s website and social platforms for the first time.

In the first act, songs like “Let Me Be Your Star” from stars Katharine McPhee and Megan Hilty and “Mr. and Mrs. Smith” with Will Chase and Hilty were set alongside words from Monroe herself, detailing everything from her marriage and divorce to baseball legend Joe DiMaggio to her relationships with her mother and fame. Shaiman appeared on the piano for “Never Give All My Heart” and an ensemble of men with baseball caps and bats accompanied Hilty for “The National Pastime.”

“‘Smash’ is one of the things I’m most proud of, the fact that we were able to bring Broadway to Middle America, to people who will never have the money to be able to travel to New York and actually sit in the theater,” said Messing. “I’m constantly asked, especially cause I was on a reboot, to go, ‘Ok? what about [‘Smash’]?’ If it’s in New York, I’m in.”

But the show wasn’t always well-received, a trend of hate-watching grew in the later seasons, a trend that Jordan described as, “Really, really difficult to go through.” Thankfully the negativity eventually subsided over the years, “It suddenly vanished and it’s like it never happened,” Jordan described.

In regards to the feud between Hilty and McPhee’s characters as they jockeyed to win the role of Monroe, McPhee said that because of their chemistry, it was hard to be catty to Hilty during their scenes.

“We genuinely liked each other and I remember when we were recording ‘Let Me Be Your Star,’ I turned to her and I said, ‘It’s like we’re living a dream, isn’t it?’ And we just both knew we had landed on something that was so special and that I think collectively we were living out every dream we could possibly have wanted,” said McPhee. “Being b—-y to each other wasn’t actually the easiest part of our jobs, it was quite difficult to make that seem realistic.”

On the night that “Bombshell in Concert” was filmed, Chase recalled a conversation with Odom Jr., who was choosing between taking a role on another television show or sticking with Lin-Manuel Miranda’s musical “Hamilton” as it hit the Great White Way.

“He and I are alone in this dressing room and I’m all about TV at this point,” Chase recalled. “I’m like, ‘I got kids, I got to make money,’ and Leslie and I had this conversation and I told him, ‘Dude, forget the show, do a television show, forget the Broadway play.’ This is six months off, no money, I’m like ‘Leslie, come on, this is gonna be the biggest mistake of your life.'”

Working on “Smash” pushed former “American Idol” contestant McPhee to head to Broadway, where she starred in “Waitress.” When asked about the legacy of “Smash,” the star wants the show to return.

“I’m definitely surprised by how the show has lived on for so many years after. But as you guys know, from my Twitter and Instagram, I’m more than happy to keep it going until the show comes back and I think we need to give the people what they want,” she said.

As the show neared its end, a reading of famed acting coach Lee Strasberg’s eulogy for Monroe after her untimely death at age 36 in 1962 was followed by the last song “Don’t Forget Me” with McPhee and Hilty. The pair returned for an encore with “Big Finish,” closing the night to raucous applause.