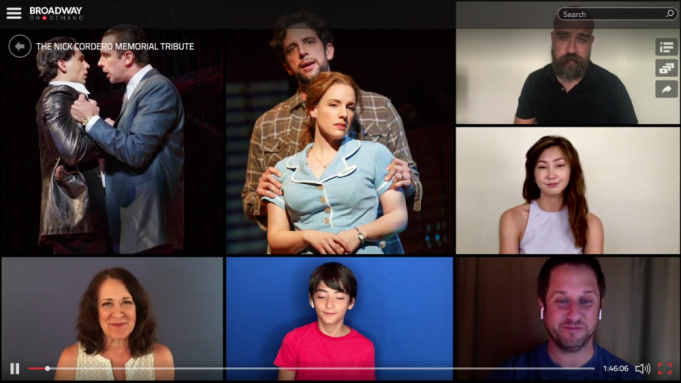 Nick Cordero, the Broadway actor who died in July of coronavirus at the age of 41, was remembered Sunday as a mega-talent with a commanding presence and husky baritone, who remained humble about his many successes when not taking center stage.

The Tony-nominated star of “Bullets Over Broadway,” “The Toxic Avenger” and “Waitress” was honored at a special memorial tribute that streamed on Broadway on Demand. It aired as the stages where Cordero made a reputation for himself as a performer with seemingly endless potential, sit darkened and empty. Broadway has been closed since March when COVID-19 began spreading throughout New York City, and it’s unclear when theaters can reopen. The spiritual center of Cordero’s work life may be closed, but for two hours, at least, members of the showbiz community gathered virtually to celebrate Cordero’s life with songs from the musicals he appeared in and personal remembrances of a promising career cut short.

Kloots documented Cordero’s more than 90-day battle with coronavirus — his setbacks, which included having his leg amputated and being put in a medically induced coma — on social media. As his condition worsened, fans and colleagues rallied around the actor by posting messages of support that included a #wakeupnick hashtag.

It wasn’t just Cordero’s singing voice or acting chops that made him so beloved. Even as his stage career took off, Cordero remained in touch with people from Hamilton, Ontario, the Canadian port city where he grew up (his orthodontist went to every show he appeared in), and took the time to sign autographs for fans after performances.

Cordero’s love of the arts extended beyond Broadway. He was a singer and songwriter, who also appeared on television in episodes of “Blue Bloods,” “Law & Order: Special Victims Unit” and “Lilyhammer.”

“Nick was a seeker,” said Lesley Cordero, the actor’s mother. “He had to try all facets of the performance industry and there were so many more that I know that he wanted to do.”

The memorial service included family photos, wedding videos and footage of Cordero’s most famous roles, as well as glimpses of early appearances in repertory productions and school musicals. It also included tributes from many notables who shared the stage, worked with, or admired Cordero, including “Bullets Over Broadway” director Susan Stroman, “A Bronx Tale” producer Robert De Niro, “A Bronx Tale” co-star Richard Blake and singer and songwriter Linda Perry.

“We’ll all meet up there some day, but he left way, way, way too soon,” said De Niro.

Stroman said she had one enduring memory of Cordero, the spotlight hitting him on the St. James stage as he tap=danced his way through a big number.

“Nothing helps you understand the fleeting artistry of life more than experiencing the death of someone you love, especially someone who dies so young,” said Stroman. “The most important gift of life are the people in our lives. The people we really make contact with, bond with, love, and share memories with. In just a few years, I’m lucky to have had many shared memories of Nick’s life.”

The two-hour tribute was free to watch, but viewers were encouraged to donate money. Funds will be used to support Save the Music, a non-profit that supports music education programs in public schools.