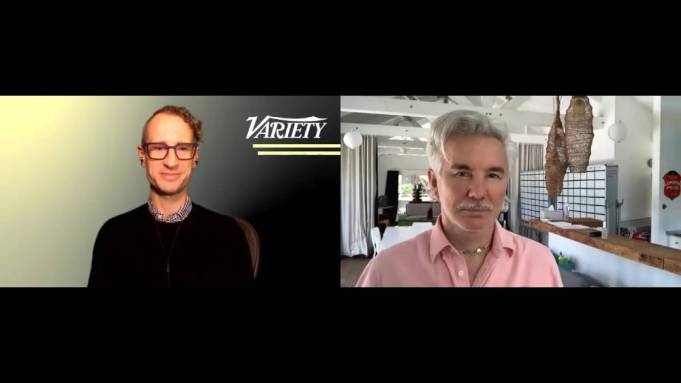 When director Baz Luhrmann visited India to conduct research for his 1993 opera “A Midsummer Night’s Dream,” he unexpectedly fell in love with the first Bollywood film he’e ever seen.

“What was incredible about that experience was…there were 2,000 people at a cinema, but that form — it could have quite serious drama, then wild musical numbers, stand-up comedy,” he said during Variety’s Streaming Room conversation with contributing theater editor Gordon Cox.

Luhrmann found a wealth of inspiration from the Bollywood movie’s storytelling, which influenced his movie musicals “Romeo and Juliet” and “Moulin Rouge.” With a love for musical theater, he hoped to explore new ways to carry over its unique elements on stage to the screen.

“I had a great love of musicals growing up,” he said. “I always thought, ‘If you look at it, musicals have a form that they take based on how well you decode musical form in a given period of time.”

Even though “Moulin Rouge” debuted on Broadway two years ago, Luhrmann believes the story feels more relevant than ever, especially during a challenging year for Broadway, local and international theaters. However, he is hopeful for young artists who are continuing to tell uplifting stories through different art forms.

“Things are bad. Shakespeare knew things were bad when you had to close theaters, and so I think the idea of creative ideals and fighting to put on a show and tell a story that has a point to it — that means something that uplifts the spirit,” he said.

The creatives were then joined by the cast members of “Moulin Rouge,” including Karen Olivo (“In the Heights,” “West Side Story”). She opened up about her experience bringing Satine to life as a “gritty, complex human being” who is distinct from the Satine portrayed by Nicole Kidman in the film.

Aaron Tveit (“Next to Normal,” “Catch Me if You Can”) reflected on performing pop songs on stage, saying he had to make sure every score worked as a narrative device from the start. Despite it being his 18th Broadway production, Danny Burstein (“Fiddler on the Roof,” “Cabaret”) said “Moulin Rouge” allowed him to portray a “dirty and sexy father figure” that allowed him to explore new sides of him.

Meanwhile, Sahr Ngaujah (“Fela”) talked about the expansion of his character, Toulouse-Lautrec, into a more integral element of the story, while Robyn Hurder explained how she kept up with her physically demanding role.

In closing, the actors spoke to how they are staying active during the coronavirus-forced shutdown of Broadway and how this year has provided a renewed appreciation for collaborating and performing onstage.