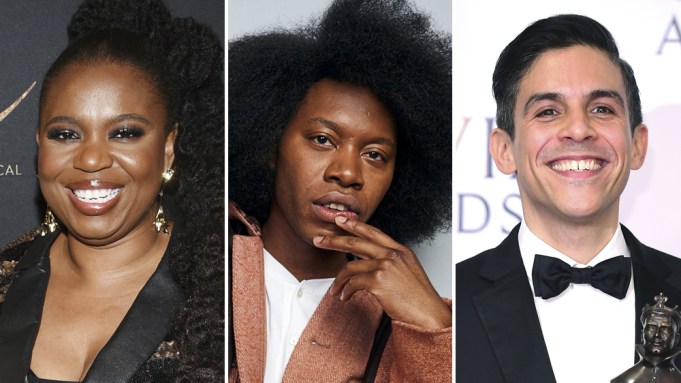 “Tina: The Tina Turner Musical” was a celebration of the life and legacy of a rock icon who shattered race and gender barriers to rise to the top of the charts. Even as it showcased Turner’s catalog of hits such as “What’s Love Got to Do With It” and “Proud Mary,” the show explored issues such as prejudice and domestic abuse, topics that don’t often grace Broadway stages. It was a hit with critics and audiences who engaged with its new take on the jukebox musical format.

And yet, book writer Katori Hall said she was frustrated that the audience for “Tina” remained stubbornly, persistently older, wealthy and white.

“You’re telling a story about black trauma and you’re looking out onto that audience and it does not look like you,” Hall said at “Legit! The Road Back to Broadway” presented by City National Bank, a panel discussion hosted by Variety on Thursday.

Hall, who was joined by Jeremy O. Harris (“Slave Play”) and Matthew López (“The Inheritance”), noted that “Tina’s” producers had made efforts to diversify the audience, but that their attempts didn’t yield results. Part of the problem, Hall argued, was that the theater industry has historically failed to reach out to people of color.

“That audience has not been developed,” she said.

All three playwrights are part of what moderator and Variety editor Gordon Cox dubbed a new generation of talent that will play a vital role in reshaping Broadway when it reemerges from its coronavirus lockdown. Before theaters dimmed their lights in March, plays like “The Inheritance” and “Slave Play” and musicals like “Tina” were hailed as evidence that Broadway had become more inclusive — Hall and Harris are Black, while López is Latino. But the three writers said that the theater business has failed to live up to the promise of a season that was cut short by the pandemic. Backstage unions remain dominated by white workers and producers are skittish about backing shows by people of color.

“You can’t have a season where you have ‘Slave Play’ and ‘The Inheritance’ and ‘Tina’ and still operate as if you’re still presenting Neil Simon’s work,” said López, adding, “If Broadway doesn’t start to look like, act like, operate like the rest of the world and the rest of media it’s just going to get stuck in the 20th century.”

López suggested that COVID-19 could change things, in part because the virus is more dangerous for older people. He hoped that would lead producers to cater to younger consumers and customers they may have previously ignored. The other panelists were optimistic that the social justice movements that have swept the country in the wake of the killings of George Floyd, Breonna Taylor, and Ahmaud Arbery will put pressure on Broadway to rethink the stories it presents to the world.

“I came to theater because I did not see myself amplified on stage,” said Hall.

Writing stories about marginalized communities has become her calling, she argued.

“That’s my ministry,” said Hall. “That’s what God told me that I was supposed to do.”

While “Slave Play” tried to reach some of those constituencies by embracing initiatives such as giving away tickets to Black student organizations, Harris said that he was frustrated by the pushback he received. His show’s general manager was concerned that offering tickets for free to students would set a bad precedent.

Harris hopes those attitudes will change so that the industry does more to ensure that “theater is not a rarefied object, but an accessible object.”

He also stressed that Black audiences are not just interested in seeing so-called “Black plays” — that is, plays by, about and starring predominantly Black people. His mother, Harris noted, loves Liam Neeson movies like “Taken” and would rush out to see any Broadway play in which Neeson stars — but she’s not in a demographic that most Broadway marketers would think to reach out to. Harris said he hopes that theater producers will begin to broaden their horizons when it comes to attracting crowds.

“I don’t just want to be going to shows by Matthew, shows by Katori, shows by myself” as the sole person of color in the audience, he said. True progress will come when he attends “Plaza Suite,” the upcoming Neil Simon revival with Sarah Jessica Parker and Matthew Broderick, and sees other brown and Black people in the audience.

“Legit! The Road Back to Broadway” also featured a panel with leading producers such as Alia Jones-Harvey (“Ain’t Too Proud” and “American Son”), Tom Kirdahy (“Hadestown,” “The Inheritance”), Kevin McCollum (“Mrs. Doubtfire,” “Six”) and Carmen Pavlovic (“Moulin Rouge: The Musical”) discussing theaters’ efforts to reopen. Currently, Broadway is not scheduled to relight its marquees until 2021 and it’s unclear if people will feel safe returning until there is a vaccine for coronavirus.

“There’s not a person on this [Zoom] call that doubts there’s a deep aching hunger to be back inside a theater, but that hunger is rooted in safety and education and awareness,” said Kirdahy. “We’re learning a lot about how to make decisions about commerce that are values-based.”

The producers also noted that Broadway, which has had no revenues for six months, may need some federal assistance to survive. There’s currently a bipartisan bill dubbed Save Our Stages that would provide $10 billion in financial support for live event venues. It’s tied up in other coronavirus relief efforts, which have so far failed to pass the Senate.

As New York begins to shake off the economic damage wrought by coronavirus, the theater industry could be a critical source of revenue. It contributed some $15 billion in economic activity in 2019, supporting not just performers, directors, and technicians, but also restaurants, hotels, and parking garages.

“It has to be led by culture,” said Jones-Harvey. “That’s what’s going to bring the city back.”

The discussion with producers was moderated by City National Bank’s Erik Piecuch, a senior VP and team leader with the bank’s Entertainment division.