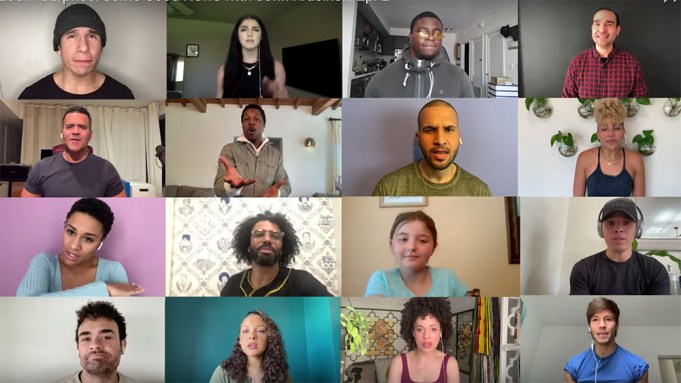 Since Broadway theaters are closed due to the coronavirus pandemic, Lin-Manuel Miranda and the cast of “Hamilton” turned everyone’s home into the room where it happened.

Miranda and his former castmates appeared on the second episode of “Some Good News,” John Krasinski’s new web show designed to inspire optimism and brighten spirits at a time when much of the world is social distancing amid the global health crisis.

The original Broadway company reunited over video chat to surprise Aubrey, a young “Hamilton” fan whose plans to see the musical in New York were canceled because of the pandemic. Krasinski and his wife, Emily Blunt, gifted Aubrey with tickets and airfare to see the show in Manhattan once quarantine efforts lift.

But Miranda, who joined the video call soon after, promised he could “top that right now,” before kicking off a performance of the musical’s opening number. Leslie Odom Jr. (Aaron Burr), rocking a subtle quarantine beard, then entered the chat, as did Daveed Diggs (Marquis de Lafayette and Thomas Jefferson), Christopher Jackson (George Washington), Phillipa Soo (Eliza Schuyler) and Anthony Ramos (John Laurens and Philip Hamilton).

The group was later accompanied by others from the cast, such as Renée Elise Goldsberry (Angelica Schuyler), Jasmine Cephas Jones (Peggy Schuyler and Maria Reynolds) and Okieriete Onaodowan (Hercules Mulligan and James Madison).

Krasinski launched “Some Good News” last month, with the first episode serving as a mini “Office” reunion featuring Michael Scott himself, Steve Carell. In honor of the 15th anniversary of “The Office,” Krasinski and Carell reminisced about their favorite memories from the show.