How St. Vincent and Carrie Brownstein Convinced Dakota Johnson to Make a Cameo in ‘The Nowhere Inn’ 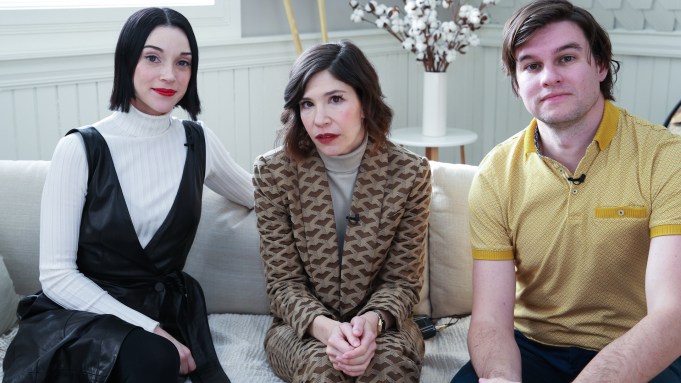 “The Nowhere Inn,” which premiered at the Sundance Film Festival, is a music mockumentary that stars Carrie Brownstein, one of the founding members of the rock band Sleater-Kinney. In the film, Brownstein plays the director of a documentary chronicling Annie Clark’s music persona St. Vincent on a fictionalized version of her Masseduction tour, but to another layer of meta-reality to this project, she’s done that in real life, too. (Her credits include episodes of “Portlandia” and “Mrs. Fletcher.”) But Brownstein did not direct “The Nowhere Inn,” which was made by Bill Benz.

Are you still with us?

During an interview in the Variety Studio at Sundance, Brownstein was circumspect about the Oscars once again snubbing women directors this year. “I’m of two minds,” she said. “I think there’s something a little arbitrary about awards. There were actually so many great movies this year, many of which were directed by women, but I think looking to institutions as the first place for validation is not necessarily where we need to be.”

Brownstein continued: “We need to change the institution,” she said. “It’s frustrating. Let’s get a new Academy going or something.”

The group’s critical views of awards and accolades doesn’t diminish their desire for recognition when it comes to “The Nowhere Inn,” though. Benz joked that they welcome any prizes on behalf of the film, which also features a Dakota Johnson cameo, as herself, in a hotel room.

In the film, St. Vincent begs Brownstein’s character to shoot a sensual scene of her and Johnson, both clad in matching lingerie, with her iPhone. Clark explained how they got Johnson to sign on to the project, referring to the actor as “a really great sport for what was a very strange ask.”

“I think it was originally, like, ‘Dakota will you play my girlfriend?'” Clark said.

“It wasn’t like, ‘Will you put on lingerie and come hang out?'” Brownstein added.

Onscreen, Brownstein balks at shooting the scene, noting the lack of an intimacy coordinator on set. True to their method acting ways, there wasn’t an intimacy coordinator on the set of “The Nowhere Inn,” either. But Brownstein pointed out since there wasn’t an actual sex scene, they didn’t need one. Still, the group talked about expectations beforehand and choreographed the scene.

“The Nowhere Inn” challenges stereotypes about musicians, showing that life on the road is not particularly glamorous. “It’s not just champagne and groupies,” said Brownstein.

Though the film depicts a stylized and dizzying descent into madness, it also examines the monotonous nature of touring–like when the only friend a musician has is her favorite video game. Clark, who borrowed a Nintendo Switch for the making of a film, is now fully hooked on Zelda. But don’t expect her making the jump to live-streaming on Twitch anytime soon.

She says she’ll only go there on one condition. “If the money is right.”