A young woman is once again torn between her head and heart in this followup to Netflix’s teen romantic comedy juggernaut. 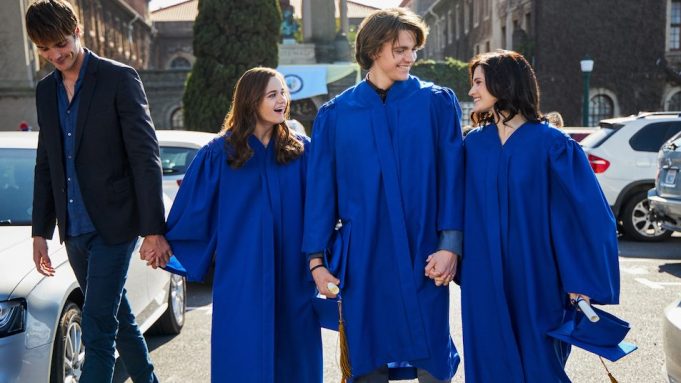 From its auspicious beginning as a novel written by then-15-year-old author Beth Reekles on the self-publish site Wattpad, to its wildly popular film debut on Netflix, “The Kissing Booth” has proven itself a hit. It spoke to its target audience without speaking down to them, telling the story of a young woman confronted with the challenge of choosing between a longterm relationship with her male best friend or a budding romance with his hotter older brother. Though its imaginatively named sequel “The Kissing Booth 2” hits similar beats, themes and emotional touchstones, it delivers a few refreshing details by giving the heroine more agency in her quest to find happiness — yet not quite enough to justify its interminable run time.

High school senior Elle Evans (Joey King) has just spent the best summer of her life with her hunky, hot-tempered boyfriend Noah (Jacob Elordi), basking in the California sun, bonding over board games and baring all her emotions. But now that school is back in session, he’s relocated 3,000 miles away, starting his freshman year at Harvard. That entails managing a packed class schedule, battling a time-zone difference, and making new friends — especially those of the opposite sex. Set on not becoming a needy girlfriend, Elle finds ways to occupy her time in Los Angeles (Cape Town, South Africa plays its convincing stand in), like podcasting, playing video games and pondering college plans. She tags along on dates with her best friend — and Noah’s younger brother — Lee (Joel Courtney), witnessing him fall further in love with their classmate Rachel (Meganne Young).

Yet just as Elle and Noah are getting used to their togetherness spent apart, they both encounter temptations. Noah finds a special kinship and chemistry with beautiful British co-ed Chloe (Maisie Richardson-Sellers), and Elle the same with her handsome new classmate Marco (Taylor Zakhar Perez). Elle also unwittingly causes a relationship rift between Lee and Rachel by not taking a back seat to Rachel (both metaphorically and physically) and monopolizing most of Lee’s free time. Things really go pear-shaped for Elle when Noah suggests she break one of her sacred agreements with Lee, begging her to apply to Harvard so she can be with him. Not only will our plucky heroine have to keep that alternate plan a secret from her bestie, she’s also forced to enlist his help in winning her tuition money in a dancing video game contest.

Similar to the first feature, which struggled to find a proper balance between the friendships and romantic conundrums faced by its three leads, this iteration suffers from another narrative crisis in that it tries to be too many things all at once — and doesn’t totally succeed at any of them. Writer-director Vince Marcello and co-writer Jay S. Arnold can’t make up their minds about what the conflicts are and how to resolve them in a clever, compelling or concise manner, so they repeat many of the same tonal notes over the film’s egregiously bloated 130 minutes.

Instead of building to one climax, the film juggles three — the dance competition, the kissing booth and the characters’ homecoming — as the filmmakers struggle to sustain equal attention for the various plotlines. By the finale, a lot has happened, but little was actually solved. Situations end on an upbeat, happy note even though there’s no resolution. Elle’s issues with her inner circle, and theirs with her, persist. This isn’t just sequel-baiting, but negates this chapter altogether.

That said, this installment has a smidge more redeeming value than its predecessor. Presenting Elle with a healthier, supportive relationship alternative adds depth to her arc. The film also finds its strength by leaning heavily on the narrative’s inherent irreverence, from comedic pratfalls that add dimension to the beefcake on display to instances of heartrending humiliation, like Rachel’s ultimatum to Lee while she’s dressed as a sugary confection. While the execution can be a bit ham-handed, it admirably avoids pitting its female characters against each other.

This time around, the filmmakers have made things a little less heteronormative, including an LGBT storyline involving classmate Ollie (Judd Krok) and his concerns over revealing his crush on student-body president Miles (Evan Hengst). Though the thread feels tertiary, it’s handled with sensitivity and sweetness. And as far as the romances in this franchise go, this one is preferable to the more prominent but remedial love triangle between Elle, Noah and Marco — though leading lady King’s vibrant, bubbly performance makes us forgive many of the material’s blights.

Composer Patrick Kirst broadens a few of his original themes, immersing fans back among the characters and their world. His score is a snuggly sound-alike for a younger-skewing Nancy Meyers film, romantically charged and saccharine-tinged with a heightened dose of hijinks. Cinematographer Anastas N. Michos also doesn’t change much in terms of the expected aesthetics, lighting characters such that they radiate glowing halos no matter where they are. Editor Paul Millspaugh doubles down on the first feature’s fast cuts, delivering rapid-fire sequencing where shots don’t last much longer than a few seconds, mimicking our protagonist’s frenzied mindset.