Tom Holland and Chris Pratt are elfin teen suburban brothers who go on a quest for daddy in a Pixar movie that's pure product, but still fun enough. 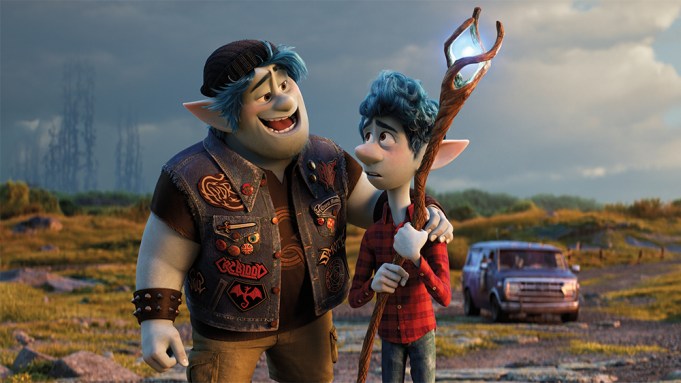 Later this year  — Nov. 19, 2020, to be exact — will mark the 25th anniversary of the premiere of “Toy Story,” the first feature from Pixar. In 1995, that movie launched the digital-animation revolution, a paradigm shift that Pixar, for a long time, more or less owned. Yet as the company’s innovations evolved into the new normal, and as other studios caught up with it (a state of affairs that seemed to become official with the release of “Shrek,” by DreamWorks, in 2001), and as the fabled Pixar brand got folded — corporately and maybe, in some ways, creatively — into the larger Disney empire, Pixar faced an increasingly steep challenge: Could it continue to present itself, film by film, as the defining mainstream animation studio? Or was it destined to become just one more sleek factory of children’s entertainment?

A glance at the track record indicates that Pixar has succeeded in retaining its singularity. In the last four years alone, movies like “Finding Dory,” “Coco,” “Toy Story 4” and (for many, though not me) “The Incredibles 2” have testified to the enduring virtuosity of the Pixar aesthetic. Yet it’s not as if every film the company releases is a masterpiece; that would be an insanely high bar. The studio had now made 22 features, and at this point you could divvy just about all of them into two categories: those that have vision and those that don’t.

“Onward” is very much one that doesn’t. Which isn’t to say it’s a bad movie. Sweet-spirited and pristine, directed and co-written by Dan Scanlon (“Monsters University”) with a visual prankishness that’s friendly and winsome and at moments breathtaking, it’s nevertheless the kind of Pixar film that feels like it was compounded almost entirely out of other visions. You won’t feel cheated by it, but you won’t feel elated, either. Yet Pixar, in its very bravura, has more than earned the right to put out a movie like this one — an unabashed piece of product, a kind of Pixar place-holder made with a tiny dash of soul.

The premise is just cockeyed enough to be ingeniously winning, though maybe more so than the story itself. “Onward” opens with a narrator telling us that “Long ago, the world was full of wonder,” and we’re then shown an image of what the world once was: a leafy fairy-tale kingdom of elves, fairies and wizards. But the magic, we’re told, was all replaced by technological innovation (we moved from gods and monsters to gas ranges and TVs), and the film then plunks the audience down in a version of the present day: a place called New Mushroomton, a middle-class American enclave dotted with surreal remnants of that ancient supernatural time.

Ian Lightfoot (voiced by Tom Holland), a gawky high-schooler in a red flannel shirt, is a domesticated elf, with shiny blue hair and Smurf-blue skin and long ears, and so is his older brother, Barley (Chris Pratt), a heavy-metal stoner type in a patch-laden denim biker vest and spiked wristband. Their “dog” is a hyperkinetic green serpent, their stepfather (Mel Rodriguez) is a cop who’s a centaur, the houses on their block all have mushroom roofs, and at school one of the kids is a giant green ogre and some of the other students have a Cyclops eye. The mini-malls feature signs written in Gothic calligraphy, and the landscape is dotted with establishments like Burger Shire and Swamp Gas and products with names like Mountain Doom.

The film’s best joke is that Barley, who alternates between speaking normally and lapsing into Pratt‘s imitation of a Jack Black voice of r-r-r-ROCK!, is obsessed with the mystic underpinnings of the ancient world … but that just makes him a typical metal-head who has latched onto the music’s medievalist trappings. He’s into a role-playing game called Quests of Yore, and the movie itself becomes a quest when Ian, on the day he turns 16, receives a gift prepared for him by his late father (who died of cancer just before Ian was born): a wizard’s wooden staff and a Phoenix Gem, which when properly wielded can cast a spell that will bring Dad back to life for one day.

Talk about second-hand visions! “Onward” is basically a 1980s Spielberg absent-father reverie combined with Harry Potter as a teenage American geek merged with “Medieval Monsters, Inc.,” all suffused with a token aura of hobbit-as-suburban-geek Tolkienism. As overfamiliar as the elements are, though, the weakest aspect of “Onward” is that once Ian and Barley leap into Barley’s beat-up 1970s van, with its custom spray-painted Pegasus on the side, the “quest” they’re on turns out to be a rather generic road movie. There are action-ride chase sequences, a visit to a ye-olde-tavern-turned-theme-restaurant run by the Manticore (Octavia Spencer), a fire-breathing griffin who looks like a refugee from “Where the Wild Things Are,” and, finally, a suspense climax with runes and shifting stone floors that are trés Indiana Jones. There is also one of those goofy final-act giant monsters, though visually he’s strikingly original: a dragon made entirely of broken concrete scraps.

The reason Ian and Barley are on the journey, incidentally, is that the Phoenix Gem got all used up (they have to find another one), so only one-half of their father came back to life: the lower half — as in, he’s a walking pair of legs who needs a torso and a head. (Outfitted with a stuffed-cloth fake top, he’s like something out of “Weekend at Bernie’s.”) The bring-back-my-dad plot is a wisp of a MacGuffin, though the way it’s finally resolved, with Ian coming to see who his caretaker really was, is touching. By the end of “Onward,” you’ll have chuckled and maybe choked up, and enjoyed a conventional ride. Which kind of places the film among the bottom third of the Pixar canon. Even the title is naggingly anonymous. Couldn’t they have called it “Spellbinder,” or “Over the Hills and Far Away,” or something? But “Onward” may, in its way, be a title that neatly sums up Pixar after 25 years, as the studio itself rolls forward with — or, in this case, without — a grand vision.