Nia Long and Omar Epps can’t successfully flip the 'Fatal Attraction' script with this laughable thriller, but there’s snarky fun to be had in watching them try 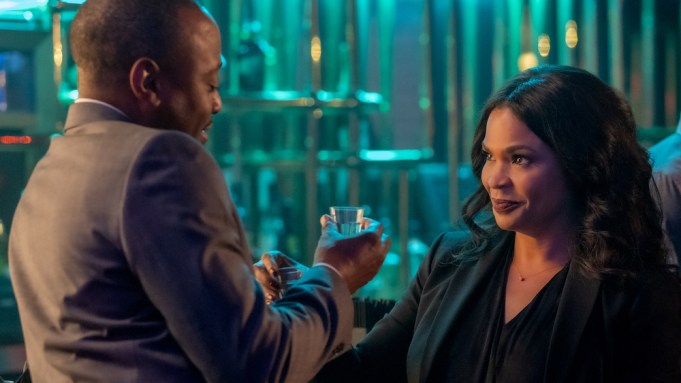 In a swank house, a man and a woman engage in amorous acrobatics before a large, glowing fireplace. The blaze seems a little ominous. So does the woman’s trip to the kitchen. And, as if to heighten the tension more, should any character coyly say “we’re not done yet” while the movie’s score promises otherwise? Probably not. But then “Fatal Affair” wastes little time delivering on its breathless title. And, that is so not a spoiler, just the start of an intermittently effective, consistently derivative thriller starring Nia Long and Omar Epps, now streaming on Netflix.

Wearing a gold wedding band with a good-size rock and heading into her and husband Marcus’ newly bought beachfront home, Ellie Warren (Long) is poised to begin living the life. She’s set to leave the San Francisco law firm where she’s been an asset and put out her own shingle. Marcus (Stephen Bishop) is diving back into architecture work, which doesn’t explain the characterless house they’ve chosen in the generically named enclave of Ocean Crest, but OK. Daughter Brittany (Aubrey Cleland) is off to college at Berkeley, but they’ve gussied up a room for her in the new house just the same. Soon the lovely couple will be empty-nesters — a good thing because after all these achievements, their marriage needs a little preening.

Enter long-ago college friend David (Epps), who’s introduced as an IT whiz. A surprise to Ellie, David has been brought onto her final case for his hacking talents. Even typing that plot point brings perverse delight. Because “Fatal Affair,” while not a comedy, has much to be amused by if you’re in the mood for a movie teetering precariously on the so-bad-it’s-good borderline. Writers Peter Sullivan and Rasheeda Garner egg on the MacGuffins and serve up some crimson herrings: a jagged scar on Marcus’s shoulder, a raft of prescription meds at the bedside, the vaguely nagging, open-ending mystery of that ill-fated pair seen at the start.

A couple of glasses of wine into the unplanned “date” at a restaurant where she had initially planned to meet bestie Courtney (Maya Stojan), Ellie breaks a reasonably good rule of many successful marriages: Don’t share the innermost details of your business. And then she breaks another and another, stopping just short of something unforgivable. A consistently likable actor, Long helps keep Ellie’s betrayal stupid but not wicked. (Really stupid.) Sure, she and Marcus are going to need couple’s counseling to clear this hurdle, but they have a chance. Only, she erred with the wrong guy.

Soon David is insinuating himself into Ellie’s life. Epps uses his compact frame and a pent-up energy to suggest a stubbornness that can morph into something more dangerous. Every new intrusion surprises Ellie but not us. When she asks David, “Are you crazy?!” — surely the best line of the movie and delivered early — it feels purely rhetorical. Because, we’ve seen David sitting across from his therapist (Fredella Calloway), and she seemed very, very concerned. With a theater audience, the movie’s call-and-response would be off the charts.

Once you realize how ridiculous “Fatal Affair” is going to be, the hook is threefold: Who’s going get killed along the way? When’s Ellie going to tell her loving, foxy husband that she did a very bad thing? (Because that’s almost the only way in which she’ll escape the hell she sloppy-drunked herself into.) When will it all end? The parlor trick of some thrillers is that they ask us to imagine what we’d do if we found ourselves in the same straits. If we’d behaved as carelessly as Ellie, would we double down on the lying? Throw ourselves on our mate’s mercy? Grab the knife repeatedly shown on the counter? Run? All of the above?

About that title, which sounds more like one of those Wayans brothers’ parodies than the real deal: “Fatal Affair” is a nod, of course, to director Adrian Lyne’s 1987 culture-defining, female-loathing flick. While flipping the script some, this more pedestrian outing still manages to be punitive, and differently woman-bashing. (What’s with the utter, and dubious, cratering of female friendship?) The good news is that there are no pets to be punished for Ellie’s indiscretion, so relax bunny fans — but that doesn’t mean there won’t be collateral damage.

Much of the movie feels more suited to the late ’80s or early ’90s than today, including its visual cataloging of aspirational perks (and movie product placement): from golf club memberships to a college-bound kid’s new Lexus. Is the movie asking if Ellie and Marcus should get to have all this one-percenter bounty without consequence? Race isn’t referenced — and yet, it”s hardly irrelevant. Ultimately, this movie isn’t “Us,” or any other shrewd riff on contemporary culture. You won’t make a fatal — or even near-fatal — error if you stream it. Sometimes a second-rate thriller is just a second-rate thriller.