Sure, the premise is puerile, but the humor is decidedly inappropriate for young viewers in this Netflix action comedy pairing Ed Helms with a 12-year-old. 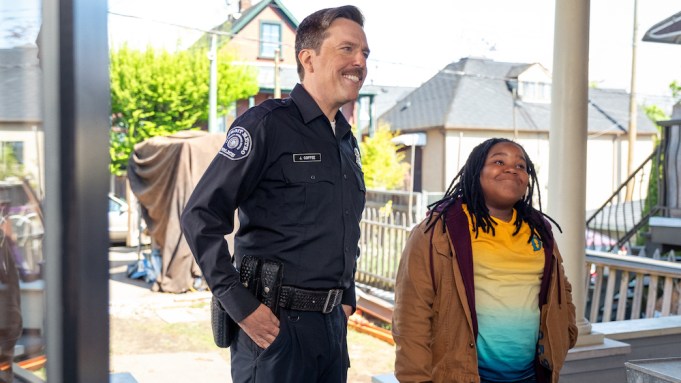 Netflix’s “Coffee & Kareem” pairs a young black kid with an inept white cop and hopes that their differences will amuse (or at least distract) stuck-at-home audiences for 90 minutes or so. But what audiences? What adult wants to watch this kind of “Kindergarten Cop” nonsense? Movies that team no-nonsense cops with rogue kids are almost always aimed at youngsters, except this one is so offensive, foulmouthed and stuffed with appalling “don’t try this at home” behavior (like the scene where 12-year-old Kareem takes the wheel of a police car for a high-speed pursuit, or the one where he shoots his mom with a taser) that no parent in his or her right mind would let Junior tune in.

But that’s the beauty of Netflix, I guess: Age-based MPAA ratings are for the chumps who make movies for theaters (such a 20th-century — or at least pre-coronavirus — concept), whereas when it comes to serve-yourself at-home streaming, there’s no divide between bad movies and bad-for-you movies.

So here’s the pitch: James Coffee is an awkward, overly cautious cop — a role for which Ed Helms is well suited (no surprise, since the fuddy-duddy comedian, best known for “The Office,” also produced). Kareem Manning is a chubbier-than-most Detroit public school misfit forced to toughen up before his time. He’s played by Terrence Little Gardenhigh, who is really good at acting angry. Kareem hates that Coffee is dating his mom (Taraji P. Henson), so he arranges for local drug dealer Orlando Johnson (RonReaco Lee) to teach the guy a lesson. That’s as terrible an idea as it sounds, especially since Coffee was just demoted for letting Orlando escape from custody. Next thing we know, Kareem and this screw-up father figure — who’s doing a very bad job of impressing the boy whose mom he wants to marry — are running for their lives.

The twist, as you probably figured out, is that Kareem is better suited to defending himself than this particular police officer. If they’ve got just one gun between them, it would be better off in the young man’s hands.

“I’ve got 42% body fat. Know why I don’t get picked on?” asks the kid. His technique — which involves shouting explicit homophobic threats as aggressively as possible — is extreme enough to amuse some. Shane Mack’s screenplay is not without laughs, but it is certainly lacking in prudence. Kareem is written as 12 going on NC-17. He swears worse than Richard Pryor, but that’s a pretty tired joke: putting inappropriate dialogue in the mouth of someone who looks like he belongs on Nickelodeon (which, incidentally, is exactly where the child actor got his start, on “Henry Danger”).

Still, Helms could have done a lot worse. Whether it was his choice to bring on director Michael Dowse or the “Goon” helmer’s decision to cast Helms, Dowse knows how to handle action. His surprisingly entertaining last film, “Stuber,” has practically all the elements this one aspires to, but flopped hard last summer. “Coffee & Kareem” delivers a couple good chases, a well-choreographed drug bust and one of those atmospheric climaxes set in an ominous steel mill where dangerous chemicals trickle slowly toward flames that could make everything erupt into a massive fireball.

This glorified sitcom fancies itself a return to the high-attitude cop movies of the 1980s — posters for the Netflix original overtly reference Reagan-era action classics like “Beverly Hills Cop” and “48 Hours” — when in fact, it hews far closer to the “what were they thinking” mismatched buddy movies of the early ’90s: epic embarrassments like “Theodore Rex” (Whoopi Goldberg partners with a dinosaur), “Cop and a Half” (Burt Reynolds saddled with an 8-year-old) and “Stop! Or My Mom Will Shoot” (Sylvester Stallone plus Estelle Getty).

Those movies were all conceived to land comfortably in the PG to PG-13 range. Because they were for kids. “Coffee & Kareem” is constructed around the childhood fantasy of getting a front seat to an action-packed police ride-along, but shoots for a more extreme kind of humor.

First there’s the racial stuff: It’s a running joke that Coffee is the lone white guy in the ensemble, and that the only other significant white person here is super-detective Watts (Betty Gilpin of “The Hunt”), the hero officer who’s everything he’s not. Mack’s script pulls the old trick of leaning into tacky stereotypes, then flipping them — the gangster who wants to be a dentist, the stripper who’s paying her way through graduate school — so the punchline relies on how incongruous it is to encounter depth in such one-dimensional supporting characters.

And then there’s the movie’s unapologetic raunch factor. When not bellowing sexually charged threats at people, Kareem has a backup strategy for getting the upper hand on adults — by shouting incredibly graphic descriptions of how they’re molesting him (which is about as funny as yelling “Fire” in a crowded movie theater). You want a scene where Coffee and Kareem hide out in a sleazy sex motel? Check. How about one where Kareem rents pay-per-view porn and cranks the volume up real loud? Check. And if you thought the kid’s demand that Coffee take him to a strip club was just a bluff, think again. There’s a shootout in a strip club.

If this sounds like someone taking a dumb comedy much too seriously, that’s almost certainly true. But it should offend people that such a project seems to be pitched at young audiences. They may well have seen worse, but don’t really need to be watching a movie whose most consistently recurring gag amounts to putting a 12-year-old in outrageously inappropriate situations. As for fans of broad “Police Academy”-style farce, Helms shows there’s potential in the Coffee character. Just hold the Kareem, please.