While America was in lockdown mode, Sacha Baron Cohen and his team concocted a searing sequel to the hit 2006 satire. As the election looms, Borat tries to give his daughter away to a high-ranking Republican. 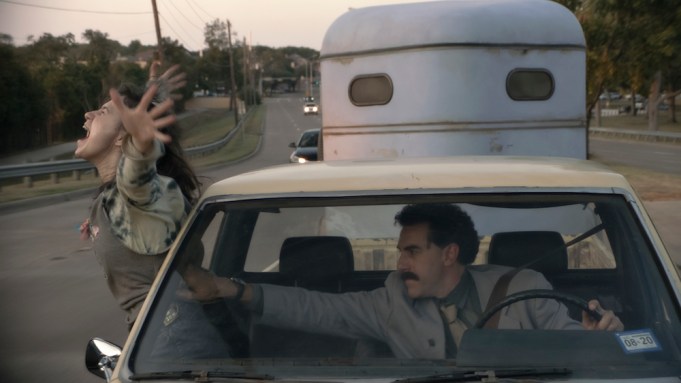 No one knows “fake news” better than Sacha Baron Cohen, who pioneered a form of bogus journalism as political satire with “Da Ali G Show” and 2006 spinoff feature “Borat.” That film — which I considered revolutionary enough to merit a place on Sight & Sound’s 2012 poll of the greatest films of all time — brilliantly blurred the lines between staged shtick and candid camera routines, bending the mock-doc format to reveal both the bigotry and generosity of everyday Americans as they interacted with what they perceived to be a clueless foreign reporter.

Now, Baron Cohen is back in character — just in time for the 2020 U.S. presidential election — with stealth sequel “Borat Subsequent Moviefilm: Delivery of Prodigious Bribe to American Regime for Make Benefit Once Glorious Nation of Kazakhstan.” Here, shot and delivered amid an unprecedented global pandemic, is a staggering act of comedic revolt with built-in viral potential. Rowdy and relevant, the film is shaping up to be the kind of October surprise capable of sparking laughs, fueling public discourse and engaging voters as serious-minded messaging can’t.

It seems almost fitting that such a critique should come in the guise of pseudo-socialist propaganda — another state-sanctioned Kazakh “documentary.” With disruptive stunts directed at such high-profile Republican operatives as Mike Pence and Rudy Giuliani (the latter will have some serious explaining to do once the film launches Oct. 23), plus boundary-pushing bits involving abortion counseling, right-wing conspiracy theories and a Ku Klux Klan cameo at a CPAC event, “Borat 2” finds the fearless comedian taking indirect aim at America’s “magnificent new premier,” McDonald Trump.

Oblique is a smart way to play it, since Trump has proven virtually impervious to parody during his term. He’s easy to tease but surprisingly tough to tarnish, as countless caricatures have demonstrated. Rather than attack the president outright, Baron Cohen and his team of co-writers (all seven of his collaborators are back on the case) chip away at Trump’s reputation by presenting Borat as a long-distance admirer, impressed to see a world leader who speaks his language of misogyny and racism.

A decade and a half ago, it was enough for Baron Cohen to say something extreme in character and let people’s reactions expose their biases (as when he convinced bystanders to sing along with anti-Semitic folk song “Throw the Jew Down the Well” in an episode of “Da Ali G Show”). Now Trump does that for him on a near daily basis.

But that’s not the only challenge Baron Cohen faces going into the project: How do you dupe Americans when so many of them are in on the joke? To the extent that the comedian’s strategy depends on punking people while in character, will that work now that Borat is a widely recognized comic star? Turns out, if you lose his trademark gray suit, you can get away with an awful lot — and more still if there are producers working behind the scenes to grease the wheels with donations (which is reportedly how they arranged for Baron Cohen, dressed in “Country Joe” disguise, to perform at a Three Percenters event protesting the government’s pandemic response).

Even more than in his previous feature outing, “Borat Subsequent Moviefilm” delivers a consistent, coherent feature-length narrative, punctuated with outrageous, unpredictable set-pieces. Director Jason Woliner (who’s worked with post-Borat stunt comics Brett Gelman and Nathan Fielder) spins a story of evolving father-daughter dynamics along which the team orchestrates what will prove to be unforgettable real-world sketches — such as the crashing of a debutante ball in Mason, Ga., a relic of slaveholding times where rich white men present their daughters to high society.

The sequel catches up with Borat in a Kazakh prison as he’s finishing out a hard-labor sentence for bringing shame to his s—hole country (keep in mind, “Borat” was never intended as a critique of the real Kazakhstan, which stands in for any nation your average American would have trouble locating on a map). Called in by the propaganda minister, he’s given a new mission: Earn Trump’s respect — and by extension, the world’s — by delivering a ridiculous gift, a chimpanzee, into the corrupt politician’s inner circle.

At first, Borat’s goal is to present Johnny the Monkey to “No. 1 ladies’ man” Mikhael Pence. Failing that, Borat decides to offer his 15-year-old daughter Tutar (Maria Bakalova) as a child bride, which vaguely explains what Baron Cohen was doing crashing the Conservative Political Action Conference in full-body Trump disguise earlier this year. For the most part, the filmmakers have done an amazing job of keeping the lid on the sequel’s biggest surprises, and it would be a shame to spoil them here. Still, it’s important to acknowledge that in an era of deep fakes, it’s not always clear what Baron Cohen got away with and what was shaped in the editing room. (In any case, that really is him pretending to take a dump outside Trump International Hotel and Tower.)

Certainly, what’s more effective about the “Borat” approach to satire than, say, Alec Baldwin’s abrasive Trump caricature on “Saturday Night Live” is the way that Baron Cohen, like the president — and like fellow real estate scion Paris Hilton, if “This Is Paris” is to be believed — has essentially committed to staying in character for years. In a sense, it takes one phony to expose another, and Baron Cohen zeroes in on the hypocrisy of the president’s selective xenophobia (ban immigrants but marry European models) by presenting Melania as a positive example to foreign girls, like Tutar, who watches a Disney-style cartoon about a Slovenian peasant who becomes an American princess.

“I will never live in a golden cage like Melania,” Tutar moans after one of many setbacks in Borat’s attempt to marry her off to “vice premier” Pence or backup-plan Giuliani. As for the cage, well, that’s just one of many ways the movie imagines the kind of casual chauvinism practiced in “Kazakhstan.” Both Borat and Tutar regularly consult a government-issue parenting binder for guidance on how to be good citizens, and while the instructions contained therein are too exaggerated to rankle anyone in the States, they serve as a valid critique of centuries of patriarchal control.

In some scenes, as with a Republican women’s meeting, one wishes the filmmakers had come up with a more effective plan than simply trying to embarrass a room full of conservatives. But contrary to his more equal-offense Showtime series, “Who Is America?,” Baron Cohen lets Democrats almost entirely off the hook, which is consistent with a larger strategy to put aside any questioning of the left in order to defeat Trump — with one major exception: “Borat Subsequent Moviefilm” constitutes a wholesale assault on political correctness.

In that sense, it pushes Trump’s own tactic of spewing hyperbole (“What is more dangerous, this virus or the Democrats?” Borat asks) and toxic stereotypes (as in Borat’s Nazi-era notion of a “typical Jew”) to such extremes, even free speech advocates may find themselves wanting him to rein it in. Then again, it’s not hard to imagine another film in which Borat is elected leader of his home country upon his return — although Baron Cohen already made that movie, and “The Dictator” was a dud.

Frankly, nothing the comedic actor has done since “Borat” has had quite the same impact, so it’s a relief that the “Subsequent Moviefilm” is no dashed-off affair, but a parody on par with the original. Granted, audiences have a better idea of what to expect now, and the shaky camerawork and extreme attempts to make even scripted bits look spontaneous distract more than they add in the year 2020. But Borat has lost none of his bite, treading that same fine line between sophomoric humor and pointed political satire.

At a time when our reality-TV president treats his rallies like stand-up comedy shows, cracking jokes to cheering crowds, this may be one of the few counterpunches to cut through the noise. The movie’s big twist involving a key campaign adviser may be “fake news,” but it’s also a case of Baron Cohen trumping Trump at his own crooked game.