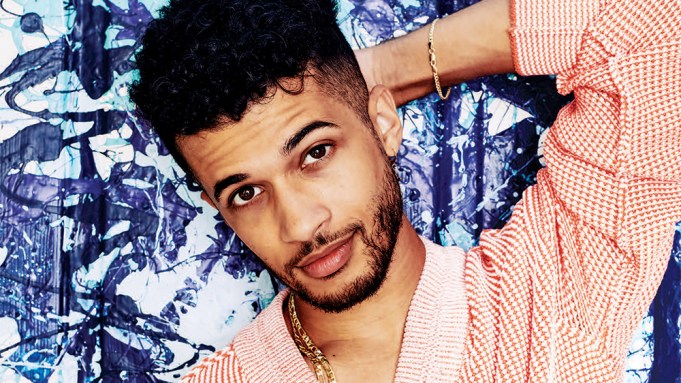 Jordan Fisher got quite emotional when he saw the poster for his new Netflix coming-of-age comedy “Work It” because the cast is so diverse. Of the nine actors featured on the poster, seven are people of color. “It literally made me shed a tear,” the actor, who is multiethnic, says on this week’s episode of the Variety and iHeart podcast “The Big Ticket,” adding, “I love to see the way that America is shaped now.”

The movie, which premiered on the streamer today, stars Sabrina Carpenter as Quinn, a high school senior who must form a dance team in time for the big championship competition in hopes of impressing a college admissions officer (Michelle Buteau). Quinn enlists a friend (Liza Koshy) to pull together a rainbow assortment of amateur dancers. Fisher plays Jake Taylor, a former dancer — his career ended when he tore his ACL — who helps get the crew into shape.

“Work It” marks Fisher’s second YA rom-com with Netflix. In February, the 26-year-old Alabama native almost stole LJ’s heart as John Ambrose McClaren in “To All the Boys: P.S. I Still Love You.” He has racked up more than a decade of television credits and spent time on Broadway in “Hamilton” as well as a stint playing the title role in “Dear Evan Hansen” before the pandemic shut down theaters. He also gained critical acclaim for his work in the live television productions of “Grease!” and “Rent.”

Was there ever a time that you didn’t know how to dance, sing or act?

You can actually ask anybody that was in my life before the age of 10, including my parents — I apparently was tone deaf. I couldn’t carry a note to save my life. I always thought that I was fine. I’d be singing Whitney Houston in the car and jamming out and doing the thing, and apparently not sound the way that I heard it. Until one day, I woke up and according to my parents and friends, they’re like, “All of a sudden, you could sing.” I had a love for music at a young age. I had a love for dance and just art in general, film, television, but I didn’t know that I wanted to pursue it.

I joined the drama club because there was a girl in fifth grade that I had a crush on. It was “Schoolhouse Rock!” I sang “Conjunction Junction.” One thing led to another, and I joined [the Red Mountain Theatre Company] and then joined its year-round conservatory program. I got bit by the bug really hard, very quickly, and fell in love.

Donald Glover. Everything he puts his hands on just turns to gold. It’s genuine and it’s real. I have a handful of friends that have worked with him, and they all say the same thing about him. They talk about how kind he is, how respected he is in the industry because of his kindness and his work ethic. He’s constantly moving and shaking and so loved in the music industry, so loved in the film industry. Writers and producers love him for his work he did on “Community” and “Atlanta.” He’s got dynamic range for days. He’s a Black man. He’s doing it and he’s so loved and so respected and happens to also be Black.

Talk about that, because there was a time when men like you didn’t have people like Donald Glover to look up to.

I think that we’ve come a long way, but God, do we have a long way to go still. I think that ultimately at the end of the day, still, Black voices are the most inspirational, but also white voices are still the most powerful. There’s not a lot of change that can happen until the white voices go, “Huh. Maybe, what if we did this?” and tested the waters.

There’s nothing like it. Chris Jackson, who played Benny in “In the Heights,” and George Washington in “Hamilton,” I was a huge fan of his. When I was 13, we had a mutual friend who got him to call me. I was a kid in Birmingham. I had just started making my first trips to L.A. Here was a guy that was working on Broadway in a show that I loved who was mixed. I was like, “I admire you so much for all these different reasons, but one of the things that I love most about you is something that you’re not even responsible for — it’s that you look like me. You represent those of us that didn’t know that we could actually do what you’re doing. You’re doing it at the highest level. That means the world.” He ended that conversation with “I can’t wait to work with you one day.” Then we did “Hamilton” years later.