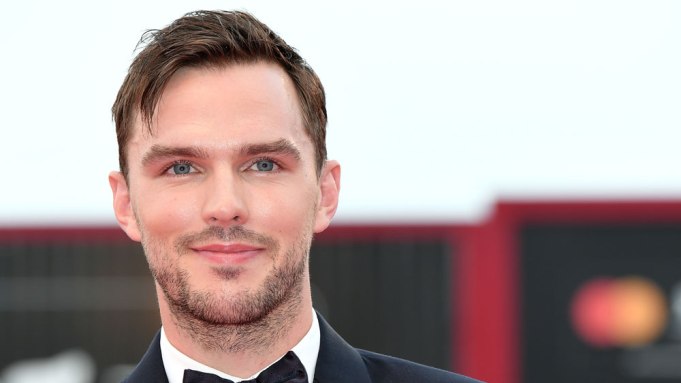 It’s not every day that filming a sex scene turns into a giggle fest.

But that’s exactly what happened — more than once — while shooting “The Great,” the Hulu series about Catherine the Great starring Elle Fanning in the title role and Nicholas Hoult as her husband Peter III.

During their many times trying to get Catherine pregnant with an heir to the empire, Peter is either spewing ridiculous dirty talk or not paying much attention to what’s at hand.

“They’re very difficult to do because they are very, very funny, and just ridiculous. And already, you’re in a slightly uncomfortable position doing that. But then add the sprinkle of hilarity on top of that and it becomes, yeah, very difficult not to start giggling. And I giggle a lot. So that was trouble for me,” Hoult says on this week’s episode of the Variety and iHeart podcast “The Big Ticket.” “I would break and sometimes it would be because something happened that was funny within the scene. If I could have just held it on for like 20 milliseconds longer, it would’ve been a great take. But it just makes me go and then I’m like, ‘Right Elle, I can’t look at you for the next take, I’m afraid. So I’m just going to kind of slightly just look just left of your eyeball and now I’ll focus there and maybe then I won’t laugh so much.’”

That’s what happens when you’re working with scripts from showrunner Tony McNamara, who earned an Oscar nom for original screenplay for “The Favourite.” “Tony writes these very offbeat sex scenes where the sex is perfunctory and happening … but there’s also all these outside elements kind of creeping in, whether it’s distracting Peter because there’s a bee and he got stung in the eye, or there’s these doctors prescribing things they have to try and do to make it more likely that she’ll conceive and things like that.”

Hoult admits he didn’t know anything about Peter before joining “The Great.” “I knew zero to nothing about Peter,” he said. “I knew of Catherine the Great, obviously the name, and you kind of are aware of rough pieces of history that she was involved with. But nothing, nothing major, to be honest with you. And it wasn’t something that going into the series I suddenly was like, ‘Oh, I’ve got to study up and learn all this history,’ because having the experience doing ‘The Favorite’ that was written by Tony as well, I kind of knew from that process that it’s taking history and then putting a twist on it.”

“So although there are some historic truths to what’s displayed, it’s also very much about creating these fun dynamics and characters and this kind of microscopic look at how the court was working in our imagination of that time,” Hoult continued.

And then there was the over-the-top period wardrobe. “[Peter] is someone who’s quite fashion-forward I suppose in a way,” Hoult said. “He likes his jewelry, he likes to impress people with his clothes and be in the latest fashion and will be intimidating with big fur coats and create dresses so that he can have a better air circulation to his genitalia.”

His shoewear — his heels were usually at about two inches high — presented their own challenges. “They’re painful,” Hoult said. “After a long day in those, I’m kind of like, ‘Alright, that’s enough. Poor feet.’”

Hoult also weighed in on the possibility of the X-Men joining the MCU in the wake of the Disney-Fox merger. He said he’d be interested in playing Beast again. “That was a fun evolution and that’s something that I’m always looking for is how a character changes. And I think there’s a lot more to explore with that character,” Hoult said. “So I’d be interested to know where they see it going next.”

One thing that won’t be happening next for Hoult is playing the villain in “Mission: Impossible.” When I talked to Hoult, he was still attached to the seventh installment of the Tom Cruise action franchise, but it was announced Thursday morning that he was exiting the project and being replaced by Esai Morales. Sources tell Variety that the shooting delay caused by the pandemic overlapped with the production of Season 2 of “The Great.”

He had already started training for the franchise’s seventh film. “Obviously Tom is a complete movie star and someone who’s so dedicated and hardworking, and wants the best from everyone around him,” Hoult said. “And those are films that I grew up completely printed on my mind’s eye, of seeing scenes from the first ‘Mission: Impossible’ when I was a kid and just been blown away by the filmmaking. So it’s exciting.”

Hear the full interview with Hoult below. You can also listen to “The Big Ticket” at iHeartRadio or wherever you find your favorite podcasts.