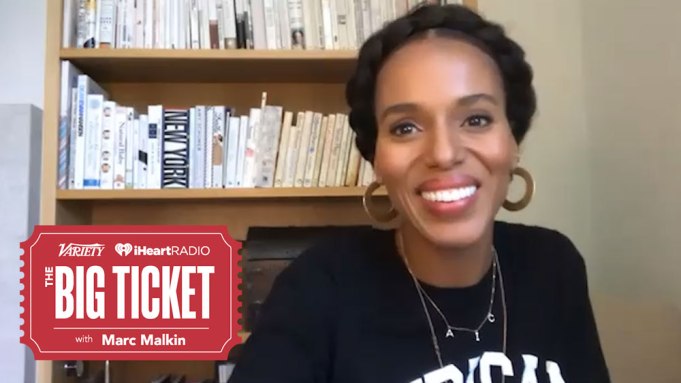 As the Black Lives Matter movement took hold of the U.S., Kerry Washington could not help but remember filming “Scandal” while she was pregnant. “It’s impossible to not worry about the Black men in my life out in the world. My cousins, my dad, my husband. That is the reality of loving a Black person in America, is you open yourself up to the vulnerability of the danger that Black people face every day,” Washington says on Tuesday’s episode of the Variety and iHeart podcast “The Big Ticket.” “I think a lot about it because I remember begging Shonda [Rhimes] when I was pregnant, ‘couldn’t Olivia Pope be pregnant?’ Because I was like, ‘How are we going to hide this person inside me? I don’t even know how to do the Olivia Pope walk with a human being inside of me.’ And she was adamant that Olivia Pope was not going to have children.”

“Olivia Pope had no vulnerabilities. Outside of Fitz, she was a superhero,” Washington explains during a Zoom call from her Los Angeles area home. “And just built into Black motherhood is fear and vulnerability. And that was a layer to her identity that Shonda knew was not right for that character.”

And now, one of the four Emmys that Washington is nominated for this year is as a producer of “American Son.” Washington also stars in the Netflix film, based on the play of the same name, as a mother who reunites with her white ex-husband at a police station trying to find out what happened to their son after the car he was driving in was pulled over by police. “It wasn’t until I started rehearsing for ‘American Son’ that I got it,” Washington says of Rhimes’ decision.

Washington’s three other Emmy nominations this year are for her acting work in and producing “Little Fires Everywhere” and producing “Live in Front of a Studio Audience: ‘All in the Family’ and ‘Good Times.’”

She’ll next be seen in “The Prom,” Ryan Murphy’s movie adaptation of the Broadway musical of the same name, with Nicole Kidman, Meryl Streep, James Corden, Andrew Rannells and Keegan-Michael Key.

Congratulations on your four nominations! We have a lot to talk about. Let’s start with “Little Fires Everywhere.” When will we see Season 2?

We have no plans for a Season 2 [laughs]. We really don’t. I mean, every once in a while we think, like, can we come up with an idea for Season 2 because we just love working together? This group, Liz Tigelaar and Hello Sunshine and Simpson Street, if I could work every day with Reese Witherspoon for the rest of my life, I would. She is just a dream, and my sister really. But we don’t have plans for a Season 2. We have other projects in development.

Were you surprised Reese didn’t get an acting nomination for “Little Fires”?

I was. Should I admit this? I was a little angry. I mean, it’s wonderful to have the nomination for the show because that means that nomination belongs to everyone. But to be honest with you, since early in my career, having watched the campaign for Jamie Foxx for “Ray” and to watch Forest Whitaker with “Last King of Scotland” and to be kind of in this awards game for a really long time, because I’ve been blessed to be a part of an experience that have been awards contenders, I also get that I have a really tricky relationship with award shows. I try to receive the beauty of it, but without letting it define who I am or how I feel.

How much do you love being a producer?

I like being a part of the team that creates an opportunity for other people to work. As a producer, your job is to create a container where a bunch of artists and artisans come to work every day and they get to pursue excellence toward this common vision. And that’s because of the producing. You create that landscape for people to soar. So I really like that. And I think I like the problem solving. That’s seven seasons of Olivia Pope. I really enjoy kind of that group, team, family feel.

When we first talked about “American Son” at the Toronto Film Festival last year, you told me the story of when you were going on vacation with your dad and at one point he went back into the house before you left to make sure he had his ID because he knew as a Black man, he should always have his ID on him when he was driving.

I think things are changing. I think it’s very true that nothing has changed, but I think we are in a pivotal moment. We are in one of those crossroads moments in the life of this democracy. And you really see it. Like you see people demanding change in their vote, in their census, in the protesting and the marching, in the volunteering. Even in the conversations, you see that we are at a new level of awakening around the reality of institutional racism in this country and our history of oppression. And I think we just have to keep pushing. We just have to keep moving forward in that dialogue and holding our elected officials accountable and empowering elected officials that reflect our values and in our smaller communities. At our dinner tables, on our family Zooms. We have to hold each other accountable and continue to create change. We are in a moment of change.

Now, let’s take a fun turn to “Live in Front of a Studio Audience.” Did you ever think you’d be on “The Jeffersons”?

[Laughs] I didn’t, but what a joy. What an absolute joy to be a part of that team and to bring those shows back. Norman Lear is such a hero of mine. The Jeffersons live in apartment 12D, I grew up in apartment 12D in the Bronx, which I remember as a kid. I adore Jimmy Kimmel, and I love working with him. So what happened was on the first special, which they’ve already won an Emmy for, because I love producing, I wound up really working with them in the trenches and just trying to be of service to Norm and Jimmy and Brent Miller as much as I could. And it was important to me that the show succeed, that these classic shows be celebrated in the right way. And so I really wanted to sort of lend my voice as a woman, to be additive as a woman and as a Black person to the team of producers and Jimmy Burrows. And so they came back for the second special and invited me to produce officially.

When will you feel safe going back to filming again?

I was going to be filming “The Prom” last weekend. I was scheduled to film and we did multiple phone calls about it with my physician because I had childhood asthma and my parents are both 80 and live in our guest house. So I have to be really, really careful. But it just wound up that with rewrites, the scenes that I was going to complete, we didn’t need to do. I felt really good about the protocols, but it was going to be like literally a half a day, which I was like, “Do we really need that moment?”

How much singing and dancing do you do in “The Prom”?

A little bit. I did a ton of musical theater in high school and college. It’s been a long time since I’ve been able to flex those muscles and I’ve never sung on screen before. So it was really fun. And I loved working with my onscreen daughter, Ariana Debose. She is Anita in Steven Spielberg’s “West Side Story” and she’s just so brilliant. And she was the Bullet in “Hamilton.” I’m really excited for everybody to see her in the film. Meryl Streep is phenomenal. She’s always phenomenal, but I’m telling you, in “The Prom,” it’s like just being there during filming. I was like, she’s incredible.

I heard she was doing these major high kicks and fan kicks.

And spins and high notes and belting. Meryl Streep has a belt, people. Like a belt, a for real Broadway belt. It’s like for real.

What do you think is going to happen in November?

What I pray happens in November is that we’re able to have a fair election. I pray that people show up to vote. I believe that if people have equal access to voting, fair access to voting and that if we can remind people that they are the heroes of their own community, then I believe in us electing not just a president, but representatives and sheriffs and DA’s that stand for the values of inclusivity and belonging and equity and justice. I think so often when a crisis happens in this country, whether it’s COVID or the election in 2016, people get online and suddenly Olivia Pope is trending. Olivia Pope, fix this! Olivia Pope, you can save the day! And I want to say to people, Olivia Pope is not real. Like you, actually, you. Whoever you are listening to this podcast, reading this article, you have more power than Olivia Pope because Olivia Pope cannot vote. Olivia Pope cannot fill out her census. Olivia Pope cannot volunteer or write a check to the ACLU. Real people can do that. So if we can remind people that they, not Olivia Pope, are the solution to the problems in their community, they are the answer to the pressing issues that they care most about, then I have real hope for this country.

This interview has been edited and condensed. You can listen to the full conversation above. You can also find “The Big Ticket” at iHeartRadio or wherever you listen to your favorite podcasts.