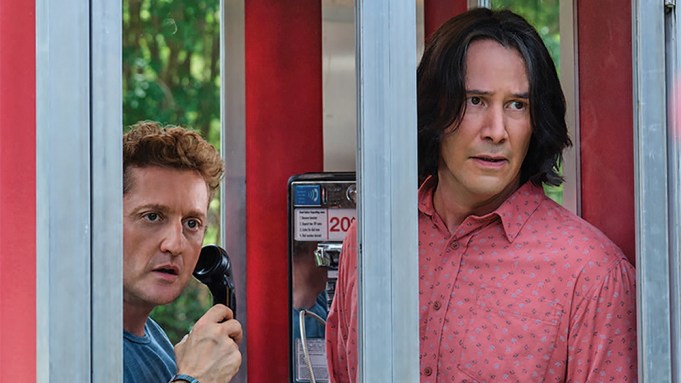 The third “Bill & Ted” movie is here at last.

Released 31 years after “Bill & Ted’s Excellent Adventure” and directed by Dean Parisot, “Bill & Ted Face the Music” sees the return of Alex Winter and Keanu Reeves as Bill and Ted, now middle-aged former rock stars who are warned by a visitor from the future that they have just 78 minutes to create a song that will save the world — and the universe — from obliteration. With the aid of their families, they time travel to cobble together a band of history’s greatest musicians, including Jimi Hendrix, Louis Armstrong and Mozart, to help them fulfill their destiny.

“We never intended to make a third,” Winter says during a joint interview with Reeves on Wednesday’s episode of the Variety and iHeart podcast “The Big Ticket.” “We never felt the world particularly needed a third, but when we were pitched this idea by [co-writers] Chris Matheson and Ed Solomon some years ago, we really did love the idea. It really made us laugh, and it warmed our hearts.”

After a decade of shopping the film around, the producers secured financing and distribution in 2018. “Bill & Ted Face the Music” will be available on VOD and in select theaters on Aug. 28.

Did you ever in your wildest imagination 30 years ago think you’d be here?

Alex Winter: No, not even 20. And for a lot of the last 10 years, it didn’t look like this movie was going to happen. We’re really grateful that we got to make it. It took a lot of people, a lot of hands on deck, to get it done. It’s been a very challenging time to release a film…Hopefully it will put a smile on people’s faces.

What’s the first thing you think about when you look back to the first movie?

I kind of forgot how family-friendly the movies are — I thought of it as a stoner movie that might not be right for the whole family.

Winter: We’re not stoners; we’re not surfers. We really are very childlike, Bill and Ted. That seems to be, I think, why little kids still like the movies. When people come up to me on the street these days, a lot of times it’s with really little kids, and I love that. I think that’s great. It’s not like that was intentional, but I think that Keanu and I both always saw these kids as these characters, as having kind of a childlike view of the world or an innocent view, but not in a caricature-ish way, ideally.

What did you think when you heard the song that saves the world in the movie?

Reeves: Dean Parisot comes from a musical background, and I knew that we were in good hands with that. I guess I could speak about this, but we didn’t have the song when we were filming, so Dean played “Ob-La-Di, Ob-La-Da” by the Beatles because for Dean, it was like, “I know 113 beats per minute would be good, and ‘Ob-La-Di, Ob-La-Da’ has a hundred and it’s a feel-good song.” For nights, we would just be listening and rock out to “Ob-La-Di, Ob-La-Da.” It’s amazing how you can listen to that song a whole bunch and not get tired of it.

Keanu, what is it like shooting “Matrix 4” right now?

Reeves: I’m here in Berlin, and everybody who’s working on the production has worked thoroughly and in concert with the local government and industries and the Babelsberg, [Germany] studios. The protocols are in place. They’re effective. The process of filmmaking has felt normal, which I’m really grateful for. And knock on wood, everybody’s been OK. We’re about three weeks in. The writers [David Mitchell and Aleksandar Hemon] and the director [Lana Wachowski] have come up with a beautiful, beautiful story. It’s really thrilling to be making a “Matrix” movie.

Lilly Wachowski [Lana’s sister and co-director of the first three “Matrix” films; she stepped away from the franchise after revealing that she’d lost interest in working in sci-fi] recently talked about the movies being an allegory for people who are transgender. Did you know there was that meaning behind them?

Reeves: No. That idea wasn’t introduced to me when we started for production on the films. Lilly never shared that with me.

Were you surprised when you heard it?

Reeves: I haven’t seen her interview or anything or read what she’s spoken about on it, [but] I miss her. I miss her not being here, but I get it as well.

Everyone is also very excited about you in starring in the video game “Cyberpunk 2077.” How did that all come about?

Reeves: It was an invitation from CD Projekt Red and they pitched the idea and showed me some assets. It seemed like a cool character and they’re definitely quality in the gaming world and it was a great experience working with them. I’m really excited…It’s a cool game. What I’ve seen from it, it’s pretty extraordinary.

This interview has been edited and condensed. You can listen to the full interview with Reeves and Winter above. You can also find “The Big Ticket” at iHeartRadio or wherever you listen to your favorite podcasts.