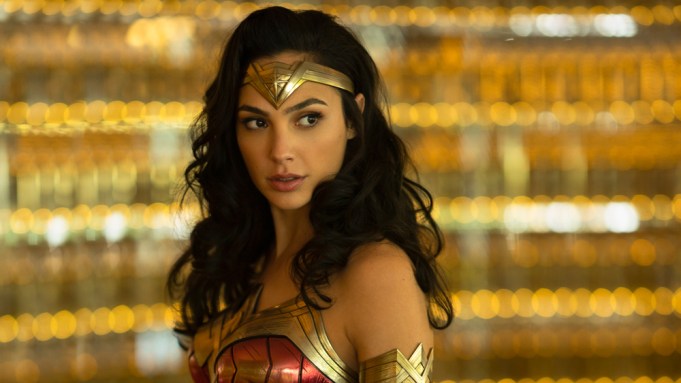 Gal Gadot really is Wonder Woman. She not only suffered neck and shoulder injuries while shooting “Wonder Woman 1984,” but she says the first film also landed her in the operating room.

During the entire six-week press tour for the original “Wonder Woman,” Gadot says she had a hernia in her back, something doctors attributed to a combination of her stunt work and then being pregnant after shooting “Wonder Woman” and “Justice League.”

“I couldn’t sit. I could only lay down or stand up,” Gadot says. “If you go back now and look, I’m always standing. When the movie premiered finally on [June 2], I was in the OR getting my back fixed.”

But Gadot, isn’t complaining. “It is what it is,” she says on this week’s episode of the Variety and iHeart podcast “The Big Ticket.” “It’s such a physical role, like the physicality is another character that I have to play. But it has its toll.”

“Wonder Woman 1984,” which will be released in theaters and on HBO Max on Christmas Day, reunites Gadot with Chris Pine as well as director and co-writer Patty Jenkins. Pedro Pascal joins the franchise as the villainous Maxwell Lord, as does Kristen Wiig as nerdy anthropologist Barbara Minerva, who transforms into another Wonder Woman nemesis called Cheetah.

How happy are you that people are finally going to see “Wonder Woman 1984”?

Super excited. We shot the movie back in 2018 and the movie was ready to be shared almost a year ago and we just kept on pushing and pushing because of COVID. And the fact that we’re going to share it with everybody right now for the holidays is the best feeling.

Is it a political movie?

No, I don’t think it’s a political movie. I think there’s some political elements just because it’s the nature of the world and we’re dealing with some subjects that can easily be connected to politics. But the movie is not about politics. The movie is about something that is much more simple. It’s about truth and the power of truth and hope.

What’s your reaction when hear people say that Maxwell Lord is Donald Trump? Even one of his lines is “I’m not a con man. I’m a television personality and a businessman.” How could we not think it’s Trump?

It’s interesting because when we shot it, we didn’t really think about it until we got to the White House. And then we’re like, “Hmm.” Maxwell Lord has so many different versions in the comic books. And I think that Patty and Dave [Callaham] and Geoff [Johns] — the writers — really took Gordon Gekko’s personality. The thing about Maxwell Lord in our movie, unlike the comics, is that he’s more complex because he’s not just an evil villain. He is a regular person who wants to be all these things that you would see on TV. I know from Pedro while we were shooting the movie, that at a certain point, he just focused on the page and what was there. And along with Patty, they just created this character. But we never tried to mimic anybody else. We never tried to mimic Trump or anything.

The message of the movie really could be: Be careful what you wish for.

That’s what it’s all about really. Before the script was written, Patty and I already discussed the story for this movie while we were shooting the first “Wonder Woman” back in 2016. Back before we knew anything. We felt like the Wonder Woman saga should be like the Bible. The first chapter was about love and the birth of a hero. And when we discussed the plot for the second one, we already found the world was going to a dark place. We wanted to touch upon that…And I think that in the past few years, truth and fake news and all of these issues had been a hot potato, a hot topic. We wanted to touch on “When is it too much? When are we just wanting more and we’re not thinking about what’s the cost of our want?”

Now I have to talk to you about the ’80, because I’m a child of the ’80s. I noticed they didn’t put you in too much ’80-ish clothing. You had some of the high pants and shoulder pads, but Kristen Wiig was in the whole aerobics thing.

We felt that Diana should always look timeless. We wanted her to look timeless and elegant, but to look like she’s in the ’80s. We were very precise about her looks.

How much did you laugh every time Chris put on one of his outfits?

He loved it. He’s the only one who can pull off this look, honestly. But in real life, he actually got himself his own fanny pack and he used to ride a bicycle around the sets or locations, wherever we were, and come visit us. And he completely looked like someone from the ’80s. He loved the whole fashion and style.

When did you find out that Warner Bros. wanted to put the movie on HBO Max and in theaters simultaneously?

Were you surprised when Warner Bros. announced its entire 2021 slate was going to HBO Max? People like Christopher Nolan were not happy and saying that filmmakers weren’t being treated fairly.

They’re right. The discussion that we had was personal only about our project. I was surprised by the announcement as well.

I know it’s only supposed to be a one-year plan, but do you think people are going to get too used to watching movies in their living rooms? Is it going to hurt theaters?

I remember when music became super accessible from Spotify and Apple and all that, everyone worried about what is it going to do to concerts and everything? Whenever there’s a good concert of an artist that I love, I would always prefer going to the concert. There’s nothing that can replace that experience of being there live and hearing it in the right volume with the atmosphere and all the people in the crowd. So that’s how I feel about the moviegoers as well…I think people still want to have the full-360 event of enjoying a movie in the cinema. I’m convinced that once the pandemic is over, the theaters will be back. I just hope that they have the ability to survive until that happens.

When do you start shooting “Wonder Woman 3”?

I don’t know. We don’t talk about it yet. We have no idea. You never know. I would love to do another one if the story is great and with Patty of course. But I don’t know. We’ll have to wait and see.

Well, we want to see a third film!

I want to see a third movie — to have a nice closure, a trilogy.

How excited are you about the world seeing Zack Snyder’s cut of “Justice League”?

I’m very excited. I’m very happy for him that he got the opportunity to show his own version of the movie. I’m super excited and I can’t wait to watch it.

Did you have to come back for any of the re-shoots?

WarnerMedia announced that they finished an investigation into “Justice League.” Were you part of that investigation?

And are you happy with the “remedial action” they took, despite nobody knowing what that means?

I don’t know what that means either. I know that they’ve done a very thorough investigation, even just by how much time I spent with them. And yes, I’m curious to know what’s going to be the outcome.

Now let’s talk “Red Notice” with Ryan Reynolds and Dwayne Johnson. They’re big jokesters and pranksters. What did they do to you?

It’s funny because we started the movie back I think in January of this year. We were shooting for a few weeks and then COVID hit and we halted everything. So when we came back on August or September, it was such a different environment to be working on. They’re the best and I adore them and I love working with them, but the entire crew had to be sequestered and had to be away from their families. And just the atmosphere on set is always filled with tension because people are so worried about COVID and everyone looks like spacemen because they’re wearing all the PPE. So we had a lot of fun working on the movie, but we didn’t prank. We felt like there was no room to be too goofy because the time was serious. But I’m so happy we got to finish the movie. It’s such a weird feeling to have to start to shoot a movie and then stop for eight months. So I’m happy we got to finish it and I’m so happy that I got to do this movie with them because they’re the best.

Is it crazy action?

How much did your life in the military prepare you for all of this action work?

It didn’t really. One would think military sounds what you would think it would be. But honestly, I think more than anything, the fact that I was a dancer for 20 years before, that’s what helps me with all the stunt work. Because it’s all about learning the choreographies and the timing, and it’s all about the movement. So I think that’s something that really helped me.

This interview has been edited and condensed. You can listen to the full interview on “The Big Ticket” above, at iHeartRadio or wherever you find your favorite podcasts.