What It’s Like to See ‘Tenet’ in a Movie Theater 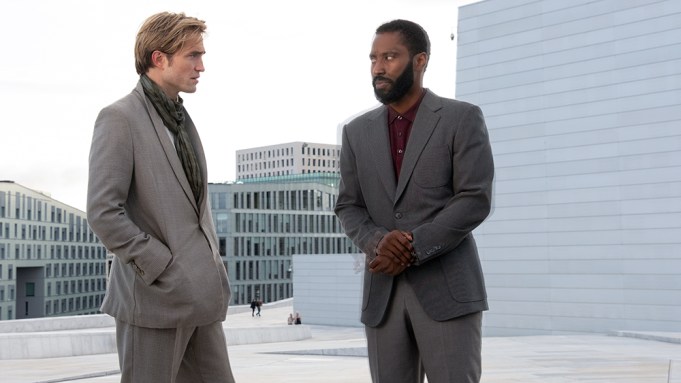 Because I’m in Vancouver, British Columbia, which has handled coronavirus extraordinarily well, I decided to go to an 11:30 a.m. showing of “Tenet” on Thursday.

Typing that sentence sounds like, Oh, I casually decided to go to see a film — no! I deliberated and deliberated, and Rebecca, my wife, bought me a face shield to wear in addition to my N95 mask — and even as I walked up to the Scotiabank Theatre in downtown Vancouver, I considered not going in. I was alone, so there was no one with whom to agonize. Since it was the first showing of the day — I told myself — and Vancouver is a mask-wearing city with mask-wearing citizens (without the hellish discourse surrounding it — people just do it), it seemed relatively safe.

I also miss going to movies, and haven’t seen one in a theater since I saw the (surprisingly delightful) “Sonic the Hedgehog” in late February with my family. And I really wanted to see “Tenet,” having bought into the hype surrounding it. (More on that later.)

I parked in the nearly empty garage attached to the theater, and put on my N95 mask. I also grabbed my hand sanitizer, and put my face shield and water bottle into my backpack. I felt armed. (It turns out that you’re supposed to download an app in order to pay for parking, but I didn’t see that until hours later when I was literally pulling out of the garage, so… I stole that parking spot for three hours, yikes, sorry!)

I was contributing to a video Variety is doing about people in different countries seeing “Tenet,” so I filmed myself outside of the theater talking about it, and felt very silly. Then I thought of the Tom Cruise propaganda video of him in that Bane mask seeing “Tenet” in London, and felt like this is just what we’re doing right now, calm down.

Scotiabank (a Cineplex theater) has minimized contact, so I showed the theater worker my ticket on my phone, and he didn’t even scan it. (Canada!) He waved me up the escalator, where I wandered around taking more videos of all the COVID-19-related signs: about the theater’s sanitizing policies, mask-wearing and social distancing.

Speaking of social distancing, when I entered the theater 10 minutes before showtime, it was entirely empty. I found my seat, deliberately on an aisle, and soon realized that the face shield was going to be a problem during a movie: It kept fogging up. I decided I’d put it on and take it off throughout. People trickled in, but the theater — a good-sized auditorium — never had more than 25 people in it, at the most. The closest person to me was quite far. When I had checked the website that morning, it said it was sold out: Did people change their minds? Is this extreme social distancing? Tom Cruise had looked surrounded. Not that I wanted to be surrounded, God knows.

The lights went down; I was excited. There was first a message from a doctor asking people to be safe in the theater, respect social distancing when the movie is over, and to bus your own trash when you leave — that was not going to be an issue for me, because I had bought no concessions. Doesn’t that undermine all the mask-wearing and hand sanitizing? I looked around, and judged the few people I saw eating popcorn. I was also on high alert for anyone coughing, but no one did for the whole two-and-a-half-hour experience — except for me once, which I tried to muffle as much as possible, and ended up feeling like I was strangling myself.

I didn’t realize how much I’d missed seeing trailers, even one for a Jared Leto movie (“Morbius”). There were three more: “Let Him Go,” with Kevin Costner and Diane Lane, which looks like VOD excellence to me; “Judas and the Black Messiah,” the Daniel Kaluuya-as-Fred Hampton movie, which has been pushed to next year; and “Wonder Woman 1984,” which might be the next time I take my life into my hands to see a movie, assuming it sticks with its Oct. 2 release date. (I imagine that decision very much depends on the performance of “Tenet.”)

Me seeing #Tenet. (This is a time-travel tweet, a la #TenetMovie. I already saw it!) pic.twitter.com/TLFzlvroxH

As for “Tenet” itself … I understood not a word of it. I’m already too dumb for most time-travel movies, but Christopher Nolan + time travel = WHAT IS HAPPENING. I will say just a few things about it, though: Robert Pattinson was having a lot of fun in this movie — Elizabeth Debicki, however, was not. All the stuff you’re starting to read about not being able to hear the dialogue is true. But personally, I had a hard time separating my inability to hear from my inability to comprehend. It’s an objectively confusing movie, guys. You know the way after “Inception” people started using that word all the time? “I incepted this, I incepted that.” That will not be happening here with “inversion,” or the even more mystifying “temporal pincer movements.” Also, I look forward to seeing John David Washington’s next movie in which, presumably, he will not be saying “I am the protagonist!”

Not until I got I home, and — after a “Silkwood” shower — read some reviews did I realize that his character is actually called “The Protagonist.”

Yes, it was fun seeing a movie in a theater again. Was it worth it? I’ll tell you in 14 days.