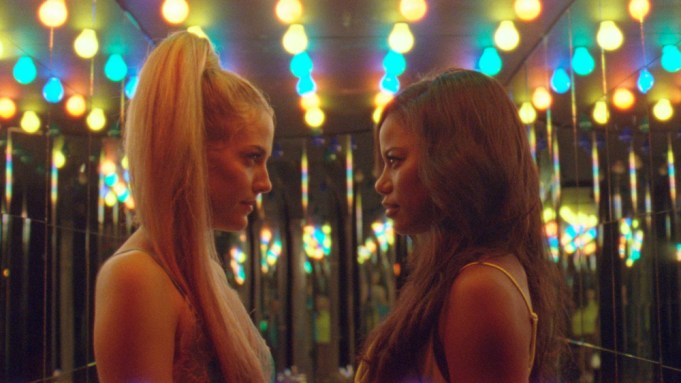 “Zola,” the A24 movie based on a viral Twitter thread, premiered to laughter and applause on Friday at the Sundance Film Festival. The film is based on a mostly true story tweeted in October 2015 by Aziah Wells King (nickname: Zola, played by Taylour Paige). King recounted, in highly entertaining fashion, her journey from Detroit to Tampa, Fla., with three near strangers, where she intended to make money stripping. But instead of a “harmless” sex-work weekend, the trip turned wild and dangerous.

Director Janicza Bravo — who wrote “Zola” with “Slave Play” playwright Jeremy O. Harris — said at the premiere that she became “immediately obsessed” with King’s story as the tweets unfolded. She said she asked her representation at the time about optioning a Twitter thread, but it had already been sold.

Bravo, Harris, the “Zola” cast — Paige, Riley Keough, Colman Domingo and Nicholas Braun — and King herself were cheered as they took the stage at the Eccles Theater for the film’s Q&A.

Paige’s Zola plays the voice of reason to Keough’s messy Stefani, who is in the thrall of her pimp (Domingo). (Braun plays Derrek, Stefani’s idiot boyfriend who is along for the ride.) Throughout the film, Bravo breaks the fourth wall to tell the story, and has figured out a hilarious workaround for having people text each other in movies. (You’ll just have to see it.)

“I think there’s a version of this movie, directed by someone else, where Taylour and Riley are swapped,” Bravo said during the Q&A.

“Zola” has had a long road to the screen. King’s story and David Kushner’s Rolling Stone article “Zola Tells All: The Real Story Behind the Greatest Stripper Saga Ever Tweeted” were quickly optioned by James Franco’s Rabbit Bandini Productions, along with Killer Films and Gigi Films. Franco was attached to direct, but stepped away from the movie, and Bravo was hired in June 2018. In December, a source close to the movie told Variety that Franco had taken his name off “Zola” before it began shooting in order not to “distract from the project.”

A24 has not yet announced a release date for “Zola.” But after Friday’s premiere, the buzz for the film will only continue to build.