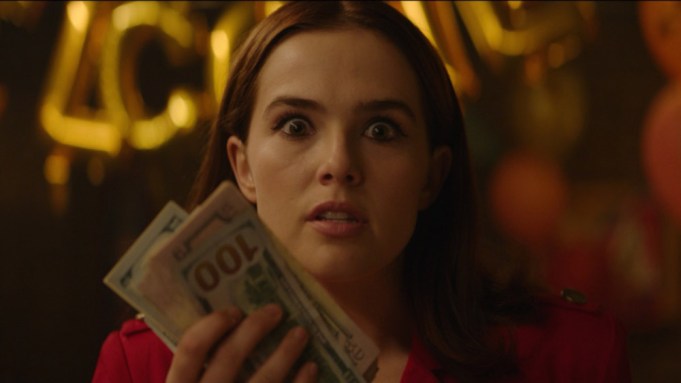 This is not your typical promotion.

Most movies rely on trailers and junkets and movie posters to get the word out. Not “Buffaloed,” the upcoming Zoey Deutch comedy about a hustler who turns to debt collecting to get out of her dead-end life in Buffalo, N.Y.

Magnolia Pictures, the indie studio behind the movie, is partnering with non-profit RIP Medical Debt to eliminate $1.5 million worth of medical debt. “Buffaloed” opens Feb. 14 in theaters and on demand.

RIP Medical Debt is a national 501c3 that uses donations to purchase bundled medical debt portfolios that have gone through collection agencies for months or years. Using third-party credit data providers, it targets debts specifically incurred by people facing financial hardship, and then forgives them for a fraction of the initial cost. There’s a lot of people who could use the relief. An estimated 137 million Americans are struggling to pay medical bills, and research also suggests that 66.5% of all personal bankruptcies are tied to medical issues.

The campaign will be launched through RIP Medical Debt’s platform, Qgiv, and will encourage people to contribute. Magnolia will offer 10 prize packages to 10 people, selected at random, who donate to the campaign.

“‘Buffaloed’ highlights the business of the debt collection world, and how hard-working people can make a good living,” said RIP co-founder Craig Antico. “But over half of all bill collectors collect medical debt — especially against people that can’t pay. The filmmakers understand this plight of the debtor, and are doing something about it. They are abolishing over $1 million in debt to help those Americans most burdened by un-payable medical debt.”

“Buffaloed” follows Peg Dahl (Deutch), who turns to debt collection after she can’t come up with the money to pay the tuition to the Ivy League college of her dreams. The cast also includes Judy Greer, Jai Courtney and Jermaine Fowler. Tanya Wexler directs from a script by Brian Sacca.