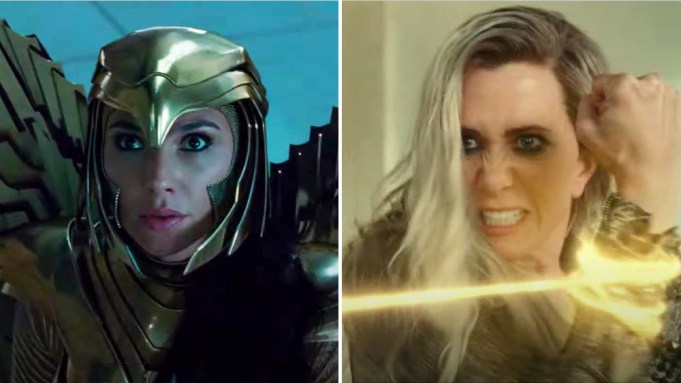 The trailer revealed a more extensive look at the film’s two villains, Barbara Ann Minerva, a.k.a. Cheetah (Wiig), and Maxwell Lord (Pascal). It appears that Lord has discovered a way to give people their deepest desires, which for Diana Prince (Gadot) is the return of her long, long, long lost love Steve Trevor (Pine), who seemingly died at the end of 2017’s “Wonder Woman.”

It also gives fans their first real look at Wiig as Cheetah, who appears to be a progressive transformation that ultimately results in her growing fur and a full tail.

This is the first extended look at one of most highly anticipated movies of the year since the first trailer for “Wonder Woman 1984” was released in Dec. 2019.

As with all major movies this summer, “Wonder Woman 1984” left its original June release date in the wake of the COVID-19 pandemic and is currently scheduled to open on Oct. 2, 2020.

Whether the film will actually stick to that date remains an open question that will largely be dictated by public health concerns, and how many people head to theaters in the coming weeks to see movies like the Marvel adaptation “The New Mutants” and the Christopher Nolan thriller “Tenet.”

One thing that was clear from the trailer and the panel is that “Wonder Woman 1984” likely will not debut on premium VOD.

“We all worked so hard to bring something that would be a big, visual spectacular. So we’re going to stick it out — we believe in putting it in the cinema,” Jenkins said in the panel, before pointedly avoiding mentioning a specific release date. “I can’t wait for the movie to come out soon!“

The trailer also does not list a release date, only noting the film is opening “only in cinemas.”

To give a sense of the scope of the movie, Pine noted that the production shut down Pennsylvania Ave. in Washington DC during production.

A standout moment in the panel came with the surprise appearance of Lynda Carter, who played Wonder Woman in the TV show that aired from 1975 to 1979. Wiig was especially thrilled to meet Carter, albeit virtually, gushing that as a kid she worshipped the show, dressed up as Wonder Woman for Halloween, and even wore Wonder Woman underoos.

“When I meet you, could you do me a favor,” Carter replied. “Could you throw your arms around me?”

The “Wonder Woman 1984” panel kicked off the first wave of DC FanDome events that are unfolding in virtual panels throughout Saturday, most of them focusing on Warner Bros. upcoming slate of features based on DC Comics properties. A follow-up event largely focusing on TV will be held on Sept. 12.