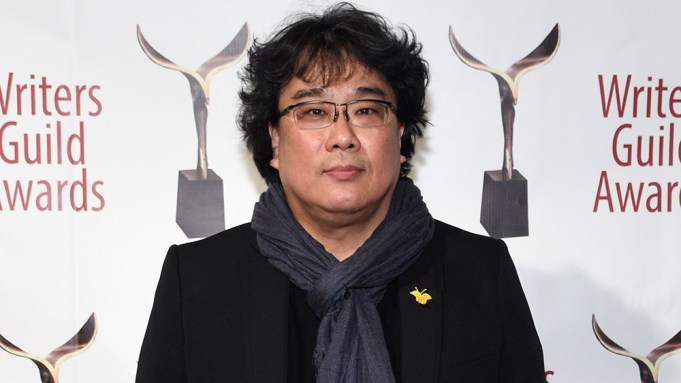 The Writers Guild of America handed out its top awards of the year in concurrent ceremonies on both the East and West Coasts on Saturday night, with big winners including “Parasite” and “Jojo Rabbit” on the film side and “Succession” and “Barry” in TV.

Bong Joon Ho and Han Jin Won took home the award for original screenplay for “Parasite,” winning out over nominees such as Noah Baumbach for “Marriage Story.” Bong expressed his gratitude to WGA members for reading his script in translation. “You understood the structure of our story and the nuance of our dialogue — it’s amazing,” he said.

In English, Bong made a reference to President Donald Trump’s polarizing political agenda by observing: “Some people make the barriers higher. We writers, we love to destroy the barriers.”

The other major film winner was “Jojo Rabbit” by Taika Waititi, which won over competitors including Todd Phillips and Scott Silver for “Joker.”

Waititi kept his time at the podium brief. He made a crack about his “obligation” to mention Christine Leunens, the author of “Caging Skies,” which was the basis of “Jojo Rabbit.” He also expressed gratitude to his mother “for introducing me to the book and making me read the book. That’s it.”

On the TV side, HBO dominated the winners’ list, starting with the night’s big winner, “Succession,” which won both best drama and best drama episode. It also scored the best comedy prize for “Barry” (although the pilot to Netflix’s “Dead to Me” won for comedy episode). And in longform, HBO did it again with its Emmy winner “Chernobyl,” which won for original screenplay, while FX’s “Fosse/Verdon” won the top prize in adapted screenplay.

Another Emmy favorite, HBO’s “Last Week Tonight With John Oliver,” won the comedy/variety talk prize, its fourth in a row.

Surprise wins included Netflix’s “I Think You Should Leave with Tim Robinson,” which beat out titans like “Saturday Night Live” for comedy/variety sketch series.

Ana Gasteyer hosted the Los Angeles ceremony at the Beverly Hilton hotel, while the New York event, held at the Edison Ballroom, was hosted by John Fugelsang. The awards ceremony comes just a week before Oscar winners are announced, and after a slew of guild awards that included the Directors Guild, Producers Guild and Screen Actors Guild, in addition to the Golden Globes.

See the full list of WGA Award winners below.

Adapted Screenplay
“A Beautiful Day in the Neighborhood,” Micah Fitzerman-Blue & Noah Harpster, Inspired by the Article “Can You Say…Hero?” by Tom Junod (TriStar Pictures)
“The Irishman,” Steven Zaillian, Based upon the Book “I Heard You Paint Houses” by Charles Brandt (Netflix)
>>WINNER: “Jojo Rabbit,” written by Taika Waititi, based on the book “Caging Skies” by Christine Leunens (Fox Searchlight)
“Joker,” Todd Phillips & Scott Silver, Based on Characters from DC Comics (Warner Bros. Pictures)
“Little Women,” Greta Gerwig, Based on the Novel by Louisa May Alcott (Sony Pictures)

Episodic Comedy
“Here’s Where We Get Off” (“Orange Is the New Black”) (Netflix)
“It’s Comedy or Cabbage” (“The Marvelous Mrs. Maisel”) (Amazon Prime)
“Nice Knowing You” (“Living With Yourself”) (Netflix)
>> WINNER: “Pilot” (“Dead to Me”), written by Liz Feldman (Netflix)
“The Stinker Thinker” (“On Becoming a God in Central Florida”) (Showtime)
“Veep” (“Veep”) (HBO)