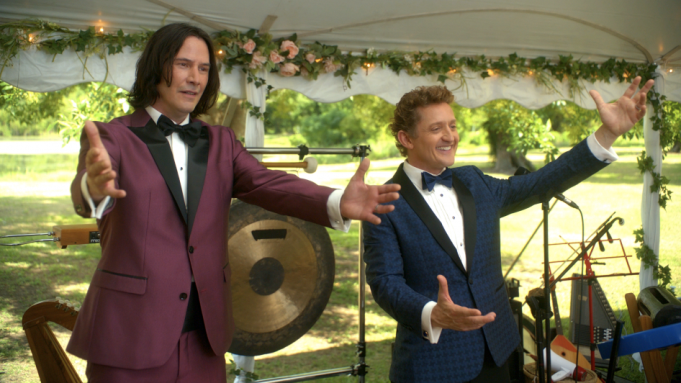 Weezer has unveiled the first song from the next installment of “Bill & Ted’s Excellent Adventure.” The song “Beginning Of The End (Wyld Stallyns Edit)” soundtracks “Bill & Ted Face the Music,” which opens on Aug. 28 in select theaters.

Wyld Stallyns, the fictional band of Theodore “Ted” Logan (Keanu Reeves) and Bill Preston Esq. (Alex Winters) returns in this third film from the franchise, only now the stoner buddies are married (not to each other) with children and they have one last mission: to find and record the song that will save music and unite the world. They have 78 minutes to do so.

As they travel throughout history on their quest, they encounter musical notables who remain a surprise, at least until the film opens, while the likes of Big Black Delta, Mastodon and Lamb of God appear on the film’s soundtrack.

Weezer teased a snippet from “Beginning Of The End” on the band’s Twitter earlier this week with lead vocalist Rivers Cuomo riffing on guitar.

The song is now available across digital platforms via 10K Projects, which will also be releasing the soundtrack for the film.

See the tracklist and cover art below: