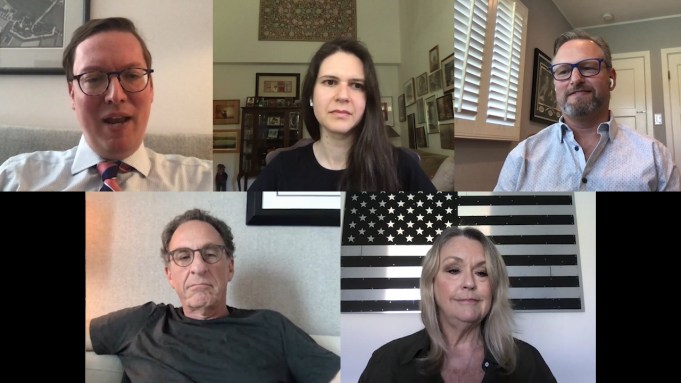 When COVID-19 forced television studios to close their doors, long-running late-night shows such as “Conan” were faced with a dilemma. Was it possible to keep being funny and lifting audiences’s spirits from home? So, Conan O’Brien and his team set out to recreate their particular brand of comedy via Zoom.

“We had no choice,” Jeff Ross, executive producer at Conan and CEO of Team Coco, said during the third episode of the Variety Streaming Room weekly series “Rebooting the Entertainment Industry.” “We went through it during the writer’s strike, after 9/11 — we realized we could do a show. Now, it’s Conan at home alone with an iPhone and a laptop, Zooming interviews and shooting comedy alone and uploading media from his phone, which can’t last that much longer…I think the audience gets it and I think the audience kind of appreciates it.”

Ross and O’Brien aren’t alone. As theaters remain closed and production is halted due to the coronavirus pandemic, delivering fresh content to audiences has become a daunting challenge for the entertainment industry.

Ross was joined on the panel by other creators from across Hollywood, including Elissa Federoff, president of distribution at Neon; Trish Kinane, showrunner and executive producer of “American Idol,” executive producer of “America’s Got Talent” and president of entertainment programming at Fremantle; and Todd Supplee, partner, media and entertainment consulting at PwC.

The panel acknowledged that the issues they are grappling with are thorny, but they also noted that there is a bright side to the new DIY ethos at play. Although producers struggle with technological issues and limited resources, Kinane has discovered new ways to connect with the “American Idol” audience since filming the competition show virtually. She noted that when contestants find out they’re advancing to the next stage, they’re captured celebrating at home alongside their family. That strengthens viewers’ connections to their professional and creative journeys.

“Some things were challenging and tricky and probably not what the audience would have preferred,” said Kinane. “But there were other things I think are arguably better and maybe we’re learning from that for the future. I’m certainly thinking about those things going forward, how to incorporate that warmth and emotion.”

As far as theaters go, most are planning to stay closed until late June or early July. Until then, Federoff says distributors are taking their content to different platforms. Films like “Trolls World Tour,” “The Trip to Greece” and the upcoming “King of Staten Island” are forgoing a traditional theatrical release entirely. Neon, the producer of “Parasite,” is trying to find a middle ground. For “Spaceship Earth,” a documentary about the Biosphere 2 experiment, the company is showing the film in drive-ins and setting up projections in cities. Neon is also allowing independent movie theaters, museums, book stores, arts and cultural organizations, non-profits, restaurants and other businesses impacted by coronavirus closures to participate in the release. These businesses can host the film on their websites and collect rental revenues.

“A lot of distributors have decided to take their content straight to PVOD or VOD or to streaming sources,” said Federoff. “A lot of the independent distributors and even some of the bigger ones have decided to take it to what they’ve called virtual cinema. Essentially all of these theaters that really want to keep engaging with their consumers, their audiences…are the VOD platform where consumers can go and buy the content.”

While dates to resume production vary across the country, the industry executives agreed that there is a pressing need to roll cameras on shows and movies to give people new content. There’s also the added nuance of new streaming players entering the space — Quibi debuted to little fanfare in March, HBO Max bows this week, and Peacock looms on the horizon. All of these platforms need to keep offering up water-cooler hits if they want to attract subscribers.

“You’ve got to continue to feed this hunger,” said Supplee. “There are still platform launches coming…There is a constant refresh of content, but we’ve always known that there is a certain point by which you need to have fresh new content on the platform in order to keep people tied to it.”

Watch the full seminar below: