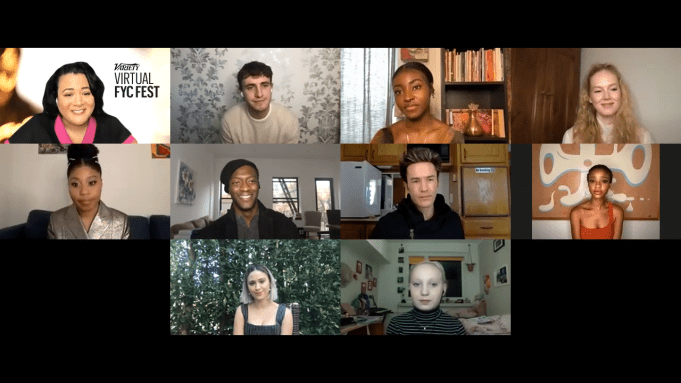 Before taking the world by storm in “Normal People,” Paul Mescal played the Phantom in “The Phantom of the Opera” at his school — and his mask kept falling off mid-production. “The Midnight Sky” star Tiffany Boone knew she was hooked on acting when, at age eight, she played an elf in the play “The Elves and the Shoemaker.” And “One Night in Miami” actor Aldis Hodge was two years old when his mother used Batman toys to bribe him to join his brother in a print job. “She said if I just took a couple picture, I’d get a Batman toy,” Hodge revealed. “That was the first actual job; I knew I could make a career out of this, because I said, ‘This is my ticket to Batman toys.’”

These were just some of the revelations that came out during Variety’s 10 Actors to Watch panel, held during FYC Fest on Dec. 15. Due to the coronavirus pandemic, nine of the 10 actors gathered virtually this year to discuss their careers in a wide-ranging conversation — Jonathan Majors, the star of “Lovecraft Country” and “Da 5 Bloods” was called into work at the last second and unable to attend.

During the nearly hour-long conversation, the actors discussed their influences and the moment they realized they wanted to be an actor. Tom Pelphrey, who had a breakout year with roles on “Ozark” and in David Fincher’s “Mank,” is still in touch with Stephen Kazakoff, a high school teacher who inspired him. “He was funny, but he was so passionate and disciplined. It was so important, and I saw it as something that could hold discipline and effort and work, and you could take it seriously and spend your life doing it,” says the actor, who was 14 at the time. “That was a revelation to me. After I met him, I was like, ‘Okay, this is what I want to do.’”

Jayme Lawson, who makes her film debut in “Farewell Amor” and is currently shooting a role in “The Batman,” spoke about growing up adoring Lucille Ball and Phylicia Rashad, and discovering acting when she attended a performing arts high school founded in Washington D.C. for Black and brown inner-city youth. “All of my teachers were Black and brown men and women in the arts,” she noted. “The first plays I got introduced to were ‘Colored Museum’ and ‘For Colored Girls’ and ‘Raisin in the Sun.’ I’m reading this material at 13, and I’m like, ‘Oh, that’s what this is about. Oh, this is why it’s important to be an artist, to be an activist.’”

Dominique Fishback, soon to be seen in “Judas and the Black Messiah,” was also a fan of Ball and when she was 12, wanted to audition for Fiorello H. LaGuardia High School of Music & Art and Performing Arts. “My middle school guidance counselor told me I didn’t have the It Factor,” Fishback recalled. “I don’t what she was going through, but it broke my heart. I went home, and I was crying all the way home.” But Fishback, who is also a playwright and spoken word poet, became involved with the MCC Youth Company and was inspired after seeing “In the Heights” on Broadway. “To see them on stage do that, it was like, ‘Okay, there is space for me. I do have the It Factor. Maybe it’s not her It Factor, but I do have something.’”

Helena Zengel, the 12-year-old German actor who stars alongside Tom Hanks in “News of the World,” cited Lady Gaga as a major inspiration — and admitted she didn’t really know who her famous co-star was when she booked the role alongside him. “I guess I saw him in some movies, but I wasn’t quite sure,” she said to the good-natured laughter of the other actors. However, when she started brushing up on his work, she realized how good he was and only had one word. “I was like: ‘Wow.’”

Maria Bakalova, the breakout star of “Borat Subsequent Moviefilm,” knew exactly who Hanks was — the actor cameoed in her film and even though she wasn’t in the scene with him, made a point to show up on set that day. The Bulgarian actor beat hundreds of other young women for the role of Tutar, the naïve daughter of Sacha Baron Cohen’s Borat. In addition to being her first English-language film — which was shot with real people not realizing that Cohen and Bakalova were playing characters — Bakalova noted that not laughing was one of the toughest challenges. “You have to keep a straight face, because you can ruin the scene, and you don’t have a second take in this type of movie,” she said. “It’s now or never.”

Rosy McEwen, who starred as a killer in “The Alienist: Angel of Darkness,” said her role provided its own unique challenges. “I was playing a woman who loses her mind and is also a murderer, so that’s so far from me,” she noted. Coming from a theater background, this was her first on-camera role, which she said had its benefits. “Because I’d never seen myself on screen, I was liberated from knowing what my good side was or where the light was. All I had were my instincts, and I think actually that was really freeing.”

Boone, soon to be seen starring as an astronaut in George Clooney’s “The Midnight Sky,” talked about the challenges of acting in “space” for her film. While noting “it was probably the easiest shoot I’ve ever done, just really laid-back,” she said the physical preparation was exhausting. “For me, I’d never done wire work. I do not like to exercise. I hate cardio. I get out of breath very easily,” said the actor, also seen in “Little Fires Everywhere” and “Hunters” this year. “I had to train for a few months in advance of just core work. And then I did a month of just stunt prep in London. The first day I did it, I think I had to stop halfway through rehearsal. I was like, ‘I can’t breathe. I’ve got to sit down. I can’t do this.’ It was challenging, but now I have a strong core, and I actually enjoy wire work. And I’m a Black girl in space, which is new.”

Mescal, who has come a long way since his school days of “The Phantom of the Opera,” noted that he’s looking forward to upcoming challenges. Hot off his Emmy nomination, he just wrapped a role in “The Lost Daughter” with Olivia Colman and is set to return to the world of musicals in a new adaptation of “Carmen.”

“I am not the best dancer, so I’m a little bit terrified,” Mescal confessed. And while his production of “Phantom” may not have been Broadway ready, it was still a turning point. “I remember the feeling, the adrenaline of that, the feeling of being on stage and acting with people, and being with an audience and playing a character. I found that feeling incredibly addicting and empowering and exciting.”