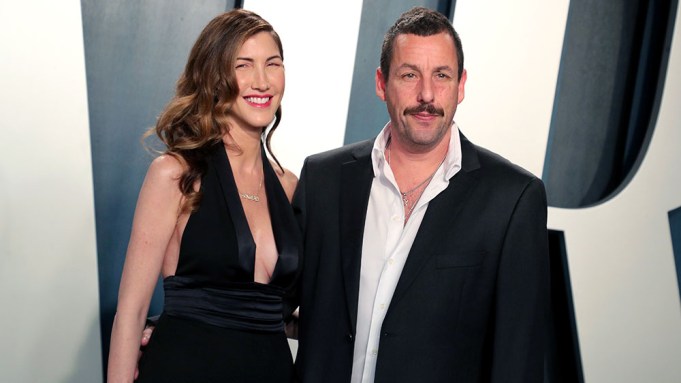 If you promise not to tell anyone, we’ll sneak you inside the Vanity Fair Oscar party. At around 11:30 p.m. on Sunday night, “Little Women” director Greta Gerwig was standing next to Noah Baumbach (OK, she was actually swaying next to him, to a Bruno Mars song). Although neither of them had won any Oscars, they should get a prize for most popular Hollywood couple as they kept getting stopped by their famous friends.

The crowds parted, and one of the bigger movie stars approached. Here was Adam Sandler. No, he hadn’t attended the Oscars (which robbed him of a best actor nomination for “Uncut Gems”), but he was wearing a suit with most of the shirt buttons open, a nod to his casual dad aesthetic. He offered Baumbach a bro handshake, gathering in a circle with Adam Driver (all three worked together on the 2017 comedy “The Meyerowitz Stories.”)

As they talked, the normally pensive Driver cracked a smile. Baumbach bit into an In-N-Out hamburger, looking exhausted. Gerwig crashed the boy’s circle. Ray Romano ambled over to talk to Sandler, then someone in the group suggested they all take a photo, and Driver stood back and snapped the shot on his iPhone. As Sandler started to wander into another part of the room, a hand reached for him. It wasn’t a random fan — it belonged to Rami Malek. Sandler almost didn’t see him, until Malek reached out again and they connected.

How do they know each other? Who knows!? The annual Vanity Fair Oscar party, hosted by the publication’s editor-in-chief Radhika Jones and held at the Wallis Annenberg Center for the Performing Arts in Beverly Hills, is a celebrity fashion spread come to life, with so many pages you don’t know where to look.

This year’s gathering was not as shoulder-to-shoulder packed as in years past because some guests decided to stay behind at the Soho House in West Hollywood, where Neon was hosting a bash for surprise best picture winner “Parasite.” But that only made the ratio of celebrity-to-non-celebrity attendees higher at VF. Among those spotted at the soiree were Billy Porter, decked out in purple, who blew an air kiss to Billy Eichner; Caitlyn Jenner, dressed in a white ensemble, who seemed to be looking for someone (maybe Kim Kardashian West or Kanye West, also in attendance); Renee Zellweger and Joaquin Phoenix, who, true to his mysterious ways, carried around a big plastic bottle of water; Monica Lewinsky; Charlize Theron, seen chatting with Universal Pictures chairman Donna Langley; Brad Pitt; Kerry Washington; Sandra Oh; and “Catch and Kill” author Ronan Farrow holding hands with his fiancé Jon Lovett.

One of the most popular guests was Billie Eilish, who had performed “Yesterday” at the Oscars during the In Memoriam segment and attended the party with her songwriter brother Finneas O’Connell. The two musical prodigies were huddled in a secluded back room with Timothee Chalamet. Then, as Eilish went to leave, she ran into Sigourney Weaver, who revealed that she was a fan. After that, she met more groupies, including “Modern Family’s” Jesse Tyler Ferguson. And finally, Josh Gad paid his respects to the 18-year-old singer, asking for a selfie.

Michael B. Jordan, who wore a cotton candy pink suit, was approached for a picture by a fan. He not only agreed, but he started to direct the fan’s friend on how to take the shot, telling him to turn on the flash. Ten snaps later, they seemed to get a picture that they liked. Maya Rudolph must be a fan of “Queer Eye,” because she exchanged a few words with the show’s food expert Antoni Porowski.

It’s true that the Vanity Fair Oscars party can be much more fun than attending the Academy Awards, and not just because there is so much to eat — ice cream sandwiches, pasta, chocolates and more. At around 1:30 a.m., Florence Pugh was spotted on the dance floor, closing out the night (barefoot) as she shimmied to Britney Spears’ “Toxic.” A few songs later, she kissed her boyfriend, Zach Braff, and they both headed home. When Miles Teller walked into the men’s room, he announced: “Good evening gents.” How nice. But it was also confusing, because there was only one other person in the bathroom.

One of the last guests to stop by was Renee Zellweger, clutching her best actress trophy. While the crowd at Vanity Fair is usually chill enough not to mob a celebrity, there was an exception for the “Judy” star, who was surrounded by flashing lightbulbs and groupies clamoring to congratulate her. After graciously making small talk with strangers, Zellweger finally made it to the outside patio, where she and her longtime manager John Carrabino found some quiet. Even at this late hour, she looked wide awake as she kept looking at her glistening statue. For Zellweger — and all of the other winners — they’d finally arrived somewhere over the rainbow.