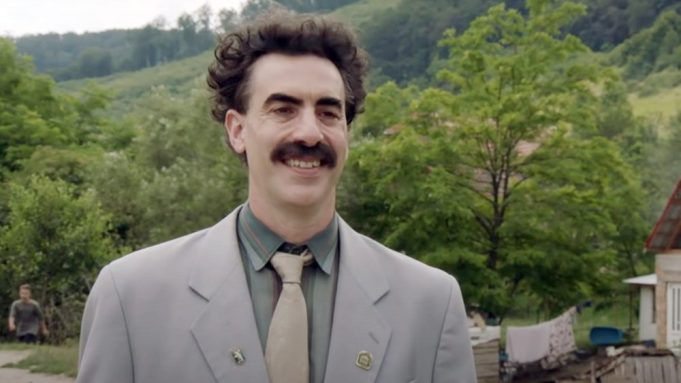 President Donald Trump has shared his thoughts on Sacha Baron Cohen’s new “Borat” film, saying that he was once the target of one of Cohen’s pranks.

Voice of America White House bureau chief Steve Herman reported the news via Twitter on Friday night, writing that Trump had discussed the film with reporters while traveling on Air Force One.

“I don’t know what happened. But years ago, you know, he [Sacha Baron Cohen] tried to scam me and I was the only one who said no way,” Trump reportedly said. “That’s a phony guy and I don’t find him funny.”

“To me, he’s a creep,” Trump added about the film and Cohen.

“To me, he’s a creep," adds @POTUS about @SachaBaronCohen. #Borat2

It is possible that Trump could be referring to a segment on Cohen’s “Da Ali G” show in 2003, in which Trump appeared and Cohen, as his Ali G character, pitched him a business idea. The idea was for an ice cream glove, meant to prevent melting ice cream from dripping on one’s hand. Trump walked out of the interview and later told New York Times columnist Maureen Dowd: ”I thought he was seriously retarded. It was a total con job. But my daughter, Ivanka, saw it and thought it was very cool.”

On Saturday afternoon, Cohen took to Twitter to respond to Trump’s comments. “Donald – I appreciate the free publicity for Borat! I admit, I don’t find you funny either. But yet the whole world laughs at you,” Cohen wrote. “I’m always looking for people to play racist buffoons, and you’ll need a job after Jan. 20. Let’s talk!”

Donald—I appreciate the free publicity for Borat! I admit, I don’t find you funny either. But yet the whole world laughs at you.

The “Borat” sequel, with its full title being “Borat Subsequent Moviefilm: Delivery of Prodigious Bribe to American Regime for Make Benefit Once Glorious Nation of Kazakhstan,” sees Cohen breaking into this year’s CPAC and spending several days with conspiracy theorists. However, perhaps the most shocking moment of the film was when Borat’s daughter, played by Maria Bakalova, interviews Rudy Giuliani, which ends with the former New York City governor in a questionable position.

Bakalova as Borat’s daughter also snuck into one of Trump’s press conferences to meet Donald Trump Jr., as shown in an unreleased clip from the film.