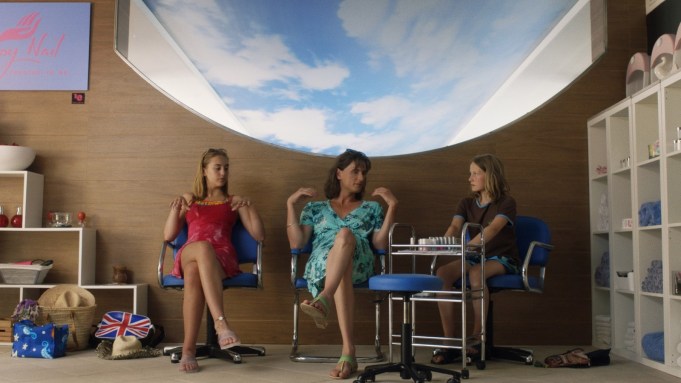 Variety has been given exclusive access to the international trailer of the Danish film “A Perfectly Normal Family,” due to compete both at Rotterdam’s Big Screen Competition, and at Göteborg’s Nordic Film Competition.
Malou Reyman’s debut feature has been a hot property for sales agent New Europe Film Sales, ever since it was sneak peeked a year ago as a work in progress at Göteborg’s Nordic Film Market. “The market response so far has been fantastic and I’m happy that the film has a broader appeal and an opportunity to cross over to the mainstream,” said the company’s CEO Jan Naszewski who has already inked a deal for France with Haut et Court Distribution.
The trailer shows Emma, aged 11, playing soccer with her dad. “Do you have to be so embarrassing?” asks the young girl to her loving dad Thomas, who’s doing his best to kick around a football. The dad talks back: ”I am? Do you think I’m embarrassing?” Two scenes later-the entire “perfectly normal family” of Emma, her dad, older sister and mum are sitting at a lunch table. A medium shot of the daughter, as her mother, off-camera, asks: “Do you want to tell them yourself?” Cut to the father who hides his face in his hands. A shot of the girls, as mom’s voice continues: ”We’re getting a divorce because…dad wants to be woman.”
“A Perfectly Normal Family” centres on Emma and her transgender father. As Thomas becomes Agnete, both father and daughter struggle to hold on to what they had, while accepting that everything has changed. Toplining the cast are “The Rain”’s Mikkel Boe Følsgaard and Kaya Toft Loholt.
The film is produced by Matilda Appelin and René Ezra for Nordisk Film with support from the Danish Film Institute. The domestic release is set for Feb. 20.